David Brown Automotive is set to release a new, limited-run version of its classic Mini restomod, featuring unique styling and audio upgrades inspired by Marshall Amplification. The British audio company celebrates its 60th anniversary this year, and David Brown has released a teaser image of the new model ahead of its full unveiling next week.

The Marshall inspiration is clear immediately: David Brown has given the car a gold front grille mesh to mimic Marshall’s iconic, retro amplifiers. The car in this teaser is painted in metallic grey, but the restomod specialist says that other colours will be available, exclusive to the Marshall edition.

The theme continues inside – the dashboard fascia and pedals have been painted satin gold, with the same shade for the stitching and pinstriping along the leather upholstery. The Marshall logo has been stitched into the seat backrests, too.

Unsurprisingly, a bespoke audio set-up will arrive as part of the upgrades, with a new system conceived by Marshall engineers.

As with other Mini Remastered models, the basis of the new limited-run version will be a fully restored, high-performance classic Mini with a reinforced shell, a subtly tweaked exterior and a more opulent cabin. 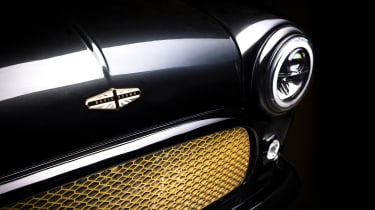 DBA modernises each car with an infotainment touchscreen, LED headlights, electric windows and keyless go, with the hope of making the diminutive front-wheel-drive hatch easier to live with.

Also key to this is an uprated engine, which this Marshall-inspired model could borrow from the high-performance Oselli edition of the car. This would mean a 1,450cc A-series motor fed by twin SU carburettors for 123bhp, driving through a five-speed gearbox and providing a 0-62mph time of 7.8 seconds.

The Oselli edition weighs around 700kg, but expect the latest iteration to pack an extra few kilos thanks to the upgraded Hi-Fi setup. Expect DBA’s upgraded AP Racing four-pot brake set-up and racier Bilstein suspension to feature on the Marshall Edition.

We don’t know how much DBA’s Marshall-inspired Mini is going to cost, but the Oselli edition was limited to just 60 examples at just under £100,000 each. For every unit sold, DBA and Marshall will pledge a donation to the Music Trust Venue, which is working to rejuvenate Britain’s independent music scene after the pandemic.