Next year, Formula 1 will be returning to Las Vegas for the first time in over four decades. However, unlike the short-lived Caesars Palace Grand Prix, which infamously ran for just two seasons in the car park of the hotel complex, the Las Vegas Grand Prix street circuit will take in the city’s famous Strip.

The Las Vegas Strip features the Nevada, US city’s highest concentration of glitzy hotels and casinos, which should provide a suitably dramatic backdrop considering the race will be run after dark.

The 3.8-mile track will be the second-longest street circuit on the calendar, behind Saudi Arabia’s controversial, concrete barrier-lined Jeddah Corniche Circuit. The design features 14 turns, a “high-speed corner sequence,” a chicane and three straights. 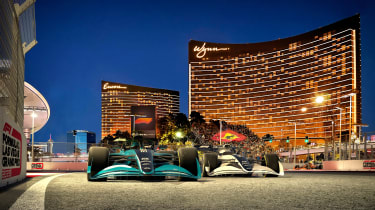 One of these will involve a 1.2-mile long blast down the Strip. According to simulations, F1 cars should hit around 212mph on the track. It’ll be a high-speed lap overall, with average speeds expected to be similar to those experienced at Monza for the Italian Grand Prix.

Scheduled for November, the race will last for over 50 laps, and the roads are due to be completely resurfaced beforehand to ensure they’re smooth enough for F1 cars. Las Vegas is one of three US-hosted Grand Prix on the calendar next year, joining the United States GP in Austin and the new-for-2022 Miami GP.

F1 President and CEO Stefano Domenicali said of the new addition to the calendar:  “This is an incredible moment for Formula 1 that demonstrates the huge appeal and growth of our sport with a third race in the US. Las Vegas is a destination known around the world for its excitement, hospitality, thrills, and of course, the famous Strip.”