The Hispano Suiza name is steeped in history, with a lineage of luxurious pre-war models and a customer base that included the likes of Albert Einstein. Today, two companies are fighting for rights to the brand, and each has produced a top-flight hypercar under the same name.

We’ve already gotten up close with the Hispano Suiza Carmen, but now the other Hispano Suiza named car company is readying its new model for production: meet the Maguari HS1 GTS.

The HS1 GTS has been in the pipeline for over a decade, with former Audi designer Erwin Leo Himmel designing a concept for the car that debuted at the 2010 Geneva Motor Show.

12 years later, the production version shares the same sleek silhouette as that car, but with a modernised, hyper aggressive design that begins with a gaping front grille. It spans across the entire front end of the car, and integrates with a set of narrow headlights and a pointed nose. 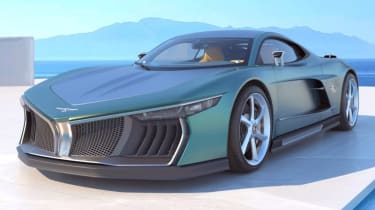 There are deep side vents that cut into the doors to cool a mid-mounted engine, with what appears to be a pair of digital door mirrors. A contrasting silver bonnet, roof and rear deck extend to a tapering rear end, which features a full width light bar, a deep diffuser and square quad-exit tailpipes. A set of strakes below the taillights appear to extract heat produced by the twin-turbocharged V10 engine.

It’s a 5.5-litre unit, and it drives through a 7-speed automatic gearbox operated with paddle shifters. The maximum power output of 1,184bhp arrives at 8,400rpm, with a mammoth peak torque figure of 1,100Nm. The original Geneva concept was fitted with a Lamborghini-derived 5.2-litre V10, so it’s possible that the production car is using an uprated version of this engine with increased capacity. Drive is sent to the rear wheels, but even without four-wheel drive, the HS1 GTS can hit 62mph in less than 2.8 seconds thanks to a pair of huge 335-section rear tyres. It powers on to an electronically limited top speed of 224mph. However, its creators say that over 249mph is possible.

A set of carbon ceramic brakes shed all that speed, but despite an aluminium chassis and carbon fibre body panels, the HS1 GTS weighs 1890kg – significantly more than other non-hybrid hypercars.

Hispano Suiza hasn’t detailed the cost of the new model, but offers a bespoke options for each customer including unique interior upholstery, paintwork and “the finest materials that money can buy”, it says.

Now read our list of the fastest accelerating cars…