Our spy photographers have caught next year’s facelifted Porsche 911 Cabriolet out testing. Despite its disguise, the changes to the new drop top are clear to see, with the German brand aiming for a subtle evolution of the current car’s looks.

Look beyond the camouflage and you can see the Cabriolet will get the same front-end treatment as the coupe, which we captured undergoing evaluation earlier this year. Likely to be designated the 992.2, the facelifted 911 will get a slightly neater grille arrangement up front and new integrated LED daytime running lights, while the rear diffuser has been redesigned to make space for a new centre exit exhaust system. We’re also expecting some different alloy wheel designs and paint options.

Due to arrive in the UK in 2023, the refreshed 911 will also benefit from some chassis tweaks and, perhaps most significantly, a fully digitised cabin that ditches the current model’s analogue rev-counter.

Also on the cards is a jacked-up Safari model, which we’ve already caught undergoing evaluation. This high-riding machine will feature plastic body cladding to help protect the panels from scrapes when driving over rough terrain, as well as GT3-style bonnet vents.

Inside, the facelifted 911 is expected to retain the same basic layout as the existing car. It’ll also benefit from Porsche’s latest PCM 6.0 infotainment system, which has just recently been updated to include Spotify music streaming, wireless Android Auto and an improved voice assistant.

Porsche’s new 911 Safari also appears to have GT3-style bonnet vents either side of the badge, but the fact they don’t appear on our latest spied prototype suggests they’ll be a quirk of the off-road model rather than a standard fixture across the line-up. 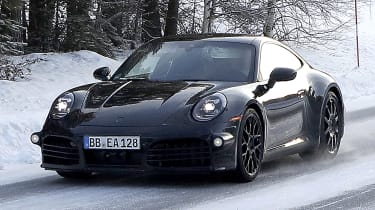 Inside, the facelifted 911 is expected to retain the same basic layout as the existing car. It’ll retain Porsche’s latest PCM 6.0 infotainment system, which has just been updated to include Spotify music streaming, wireless Android Auto and an improved voice assistant.

However, the updated sports car could move forward with a new, fully digital instrument panel, like that of the Taycan EV. The current model has an analogue rev-counter flanked by two screens, but this could be replaced with a slender curved screen that can display drive mode information, a map for navigation and a feed from the car’s night-vision system.

The next 911 could also receive an improved suite of sensors for more advanced driving-assist technologies. A raft of chassis and handling improvements is also expected to give the 992.2 sharper responses when the driver takes full control.

Porsche has honed the 911’s suspension and steering set-up as part of previous mid-life updates, so a retuned electric power steering set-up and revised chassis settings are likely. A snappier calibration for the eight-speed PDK gearbox is also possible, although the 992.2 is unlikely to receive significant powertrain revisions.

It will, however, gain a new hybrid variant. The long-awaited, electrified 911 will be part of the 992.2 line-up, although this option could be added after the launch of the facelift. The electrically assisted 911 could also end up producing more power than the 641bhp 911 Turbo S and become the most potent 911 available.