The all-new BMW M2 has broken cover at the famous Nurburgring circuit in Germany. As our spy pictures show, a disguised version of the near production-ready high performance flagship has been testing at the fearsome 12.9-mile long circuit

Due to hit showrooms this year, just in time for BMW’s 50th anniversary of its M division, the new M2 is based on the recently launched 2 Series Coupe. Yet as our images show, the M2 gets an aggressive new look. Look past the camouflage of this prototype and it appears the new M2’s design is near-enough finalised. 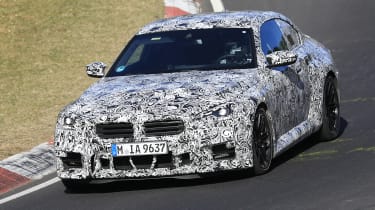