Volkswagen has confirmed the arrival of a new concept car at April’s Beijing Motor Show, which will preview the next member of the all-electric ID. line-up.

Teased during the brand’s 2022 Annual Conference, the car will be an electric saloon positioned as a zero-emission alternative to the Passat, but with a sportier, smoother profile. Boasting a claimed range of 435 miles, the VW is aimed squarely at models such as the Tesla Model 3 and Hyundai’s forthcoming Ioniq 6.

It’s not the first time Volkswagen has shown an ID. concept previewing an electric saloon. The brand revealed the ID. Vizzion concept at the 2018 Geneva Motor Show, although the impending arrival of the updated concept in China leaves question marks over the production model’s potential availability in Europe when it finally arrives next year.

Volkswagen brand CEO Ralf Brandstatter said that the ‘first’ cars would be supplied to customers in China in the second half of 2023, but did not explicitly confirm a timescale for a European launch. However, the brand has been spied testing the production version of the car in Europe. 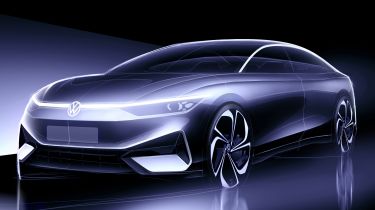 “It gives an outlook of the next ID. family member’s design. It has an aerodynamic design, a high range of 700km (435 miles),” said Brandstatter, hinting that the car will arrive using a stretched version of the group’s MEB platform with a large battery capacity.

The teaser image suggests a sleek saloon with the sportiest interpretation of the ID. range’s design language we’ve seen so far. Slim headlights are joined together by a full-width front end lighting bar, while the smooth side surfacing contrasts with a sporty front apron, with angular and aggressive air intakes.

Volkswagen has trademarked several additional numerical ID. names for future models. As such, the new saloon could take on the ID.7, 8 or 9 badge.

Another future Volkswagen, the new Passat, has been spied testing, find out more here…