Some cars may excel in one way or another, but occasionally a consummate all-rounder shows just how good the modern family car can be. The BMW 5 Series is just such a vehicle, and while you pay for such talent, the best things in life are never cheap. Since the seventh-generation 5 Series was launched we’ve pitted it against the Audi A6, Mercedes E-Class, Volvo S90 and V90, plus the Lexus ES and Jaguar XF. In every case the BMW has come out on top, so it’s no wonder that it was our Executive Car of the Year in our 2017 New Car Awards – and then again in both subsequent years. Since then the Mercedes E-Class has stolen the BMW’s thunder, but don’t let that put you off, because the 5 Series is every bit as desirable as it has always been.

The 5 Series celebrates its 50th birthday this year. It was way back in 1972 that BMW launched its family saloon, and it would go on to become the enthusiast driver’s executive car of choice, with its engaging dynamics, efficient and sonorous engines, and driver-focused cabin.

Back in 1972 the idea of a plug-in hybrid would have been fanciful; the original 5 Series wasn’t even offered as an estate. But in the intervening half a century BMW’s mid-size family car would adopt diesel engines, four-wheel drive, hybrid tech and more.

From the second-generation 5 Series there would also be an M5, just as there is with this Mk7. But that car deserves its own guide, so we stick with the more mainstream versions here, of which there are plenty.

Soon the firm added the 181bhp 520i and 228bhp 525d which, like the other models, came only with an eight-speed automatic transmission. The Touring (estate, codenamed G31) arrived in June 2017 and a 518d joined the range soon after.

A facelifted 5 Series arrived in July 2020, with refreshed styling, additional driver-assistance systems, new infotainment set-ups, and a 523bhp M550i xDrive option. By the end of the year a 545e xDrive plug-in hybrid had also been introduced.

You can’t really go wrong, whichever engine, transmission, bodystyle or trim you pick. Buy a diesel or plug-in hybrid and you should be rewarded with excellent economy; the petrol engines are impressive, but far less frugal.

The xDrive four-wheel-drive transmission provides excellent traction in wintry conditions compared with the rear-wheel-drive alternative, but you pay a big penalty in fuel economy, so simply buying winter tyres instead might be the best option.

All 5 Series are generously equipped, with the entry-level SE having 17-inch or 18-inch alloy wheels, dual-zone climate control, adaptive cruise control, LED headlights, navigation, and front and rear parking sensors, plus heated front seats with part-electric adjustment. The M Sport trim is largely cosmetic, with a bodykit and sportier details, but upgraded brakes and bigger wheels (18/19-inch) are included.

The Mercedes E-Class gives the 5 Series the hardest time, with its wide model range, excellent engines, impressive build quality, roomy cabin and lots of hi-tech equipment. The Audi A6 offers these, too, and while it’s not as engaging to drive, it’s hugely desirable. The Jaguar XF is getting dated, but it looks great and is enjoyable to drive, plus there’s ample cabin space.

All three of these come in saloon and estate forms, which is also the case with Volvo’s well equipped and incredibly safe S90/V90. We’d consider the Lexus GS and its successor, the ES, too. They’re both well equipped, incredibly reliable and extremely refined, but not as rewarding to drive.

A 520d Efficient Dynamics was offered, with an optimised transmission, reduced weight and emissions-control tech. 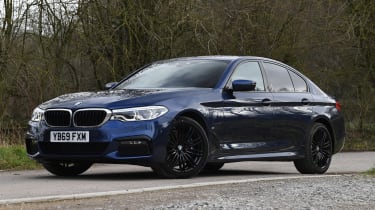 The M Sport had run-flat tyres, but the SE had conventional tyres and a mobility kit. On all except the 530e, a space-saver spare was an option.

Some owners have noticed rattles from the back seat, which can be caused by the seatbelt buckles or the seat-folding mechanism (if fitted). The problem seems to be worse when the car is cold. Having six recalls isn’t ideal, but it’s not bad, either.

Just about every aspect of the BMW 5 Series’ luxurious cabin impresses: the clear dash design, the supportive seats, the quality of the materials, the ample space for five people, and the infotainment systems, which are class-leading in terms of both their ease of use and their responsiveness.

Boot space is excellent, at 530 litres in the saloon; a folding rear seat was an optional extra, so if you find a car with this fitted, versatility is improved significantly. As you would expect, the Touring’s carrying capacity is even better, at 570 litres with the rear seats up, or 1,700 litres with them folded.

Like all BMWs, the 5 Series comes with Condition-Based Servicing, which tells the driver when maintenance is required, based on oil levels, wear rates of individual components and how the vehicle is driven. With normal driving, an oil service is due every 16,000 miles or so.

Because parts are replaced when necessary rather than according to a schedule, there are no fixed prices, but you’ll pay £277-£327 (depending on the engine) for an oil and filter change. Replace the air and fuel filters as well, and this jumps to £434-£514, while fresh brake fluid is required after three years, and then every other year, at £52-£63. Lifetime coolant is used and all engines are chain-driven, so there are no cambelts to replace.

BMW has recalled the 5 Series G30 six times so far, the first time in September 2017 because three cars made in August 2017 had a faulty steering rack. A month later the next recall was issued, because 307 cars built in August 2017 left the factory with problematic seatbelts.

Two recalls came in 2020, one in October and the next in December, because some plug-in hybrids were fitted with battery packs that could short circuit. Both times the solution was to fit new battery packs or replacement cells; 530es made between May and September 2020 were affected. The two most recent recalls came in March 2021. The first was because some 5 Series made in January and February 2021 had faulty brake discs; the second was because sub-standard driveshafts were fitted to some cars made in June and July 2020.

The 5 Series made its Driver Power new-car survey debut in 2018, in 21st place out of 75 cars. By 2020 it had dropped to 40th, then in 2021 it was 49th. It took a top-20 place in just one category (18th for connectivity), but among numerous relative high spots were the ride comfort, rear-seat legroom, refinement and cabin quality. Owners were less keen on the running costs, cabin versatility, safety features and value.