Bentley’s in-house bespoke customisation division, Mulliner, has been tasked with completing a unique space-themed Bentayga Speed. Commissioned by Bentley Orlando in the US, the one-off machine takes its inspiration from Cape Canaveral and the Kennedy Space Centre, both of which are not far from the dealership.

The theme of space is most obvious on the illuminated tread plates, which depict planets orbiting a solar system. There are also orange bezels surrounding ‘Galaxy Stone fascias’ set into the dashboard, a pattern that is mirrored in the door trims. 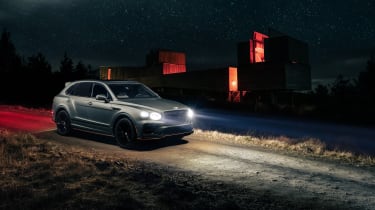 Orange is also used for the piping on the seats, door cards and for the unique Bentley badges. The centre spoke of the steering wheel is also trimmed in orange, as is the gear lever. The rest of the interior is trimmed in Beluga and Porpoise leather, which the brand claims creates a ‘dark sky, night sky-esque’ contrast to the flashes of bright colour.

The Bentayga Speed’s 6.0-litre W12 twin-turbocharged powertrain remains unchanged for this bespoke model, so while the 190mph top speed makes it the fastest SUV in the world, it’s still some way off the 17,500mph the Space Shuttle was capable of.

Check out the latest Bentley news and reviews here…