Updates have addressed some perceived quality issues from before, and the T-Roc remains refined and decent to drive. Some more electrification in the range would broaden its appeal, but go for the 1.0-litre TSI – more refined than the 1.5-litre unit – in a more affordable trim level, and the T-Roc would just cling onto a fourth star, but still wouldn’t quite deliver enough quality to compete with the class best.

The Volkswagen T-Roc has received a facelift. It’s always been a solid competitor in the compact crossover class, but the mid-life updates aim to not only bolster the areas where it offered strong appeal already, but answer back to one or two of the criticisms which it faced the first time around.

It was already among the more distinctive-looking cars in the Volkswagen class – which when faced with competition that looks as wildly different as a Toyota C-HR and a Citroen C3 Aircross, is really important to earn it a second look. There’s changes here, which make a nod to models like the Mk8 Golf and the recently-revised Polo.

At the front, the revised grille detailing is highlighted, quite literally, by an LED strip running through its full width from one headlight to the other – which also now gets LED tech throughout the range. The bumpers front and rear have been reprofiled, while at the back there’s a set of tail lights whose lenses are subtly more smokey than before. They also feature scrolling indicators.

Beyond that, the superficial changes extend to a couple of new colours and wheel designs, which start at 17 inches and grow to 19 inches.

Inside, the dashboard’s main features have been shuffled about in order to make space for a new eight-inch touchscreen. That does mean you get a slicker, bigger system than before, but on the downside, the way that the old version neatly integrated its display into the central span of the dash is no more. Instead, the new layout plonks the screen above some repositioned air vents, with its top poking out above the dashboard top.

Below those new vents is a redesigned climate panel with touch sensitive controls. The previous physical controls could be used without even having to look, which means that their low position on the dash wasn’t a problem. The new controls are much more fiddly and harder to use; they seem like a big backward step.

It’s not all doom and gloom, though. While material quality was never really a strong point of the T-Roc previously, this new model has gone some way to fixing that. In a cabin that was previously trimmed exclusively in hard plastics, the cushioned dashboard top – complete with a stitching pattern that, if you squint a bit, gives the impression of leather – helps to improve things. 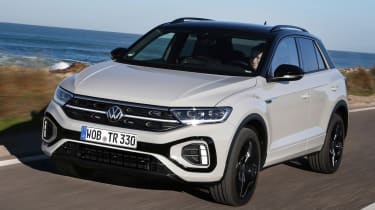 Other details, like the squidgy panels on the doors and armrests, plus the haptic touch controls on the new steering wheel (fitted to higher trim levels) subtly lift the ambience, too. It’s not going to make you feel special in the way a Peugeot 2008 does, but it’s an improvement on what was there before. Rear seat space is above average for the class, as is the 445-litre boot volume.

The way that the T-Roc drives is exactly as it was before. In other words, it’s not going to set pulses racing, but for an everyday vehicle it’s hard to fault. It goes round corners keenly enough, the light steering makes it manoeuvrable at low speeds yet remains precise enough on country roads, and road noise is well contained from the cabin. Ride comfort strikes a well-judged balance of being firm enough to deliver excellent stability at motorway speeds, yet forgiving enough to keep things calm around town.

There’s quite a broad range of engines to choose from, though the lack of a plug-in hybrid option will limit its appeal to company car drivers.

Diesel buyers can choose from a 2.0-litre diesel with either 113bhp or 148bhp. The lesser model is six-speed manual only, while the other gets a choice of manual or seven-speed auto for front-wheel drive variants, and an auto-only four-wheel drive model.

The petrol lineup gets three different engines. The range kicks off with the manual-only 108bhp 1.0 TSI and tops out with the 187bhp 2.0 TSI; the latter exclusively offered with an auto and four-wheel drive. Sitting between them on price and power is the 1.5 TSI which makes 148bhp, is front-wheel drive, and gets both auto and manual gearbox options.

We sampled the 1.5 TSI unit with the DSG gearbox alongside the manual 1.0-litre TSI. While the 1.5 has stronger performance, it’s the smaller three-cylinder unit that’s quieter and more refined. The manual gearbox is precise enough, too. It’s the one we’d go for.

The trim lineup has been simplified for 2022, with an entry-level Life, a posher Style and sporty R-Line variants offered. As before, there’s even a convertible version, too. At the top of the range sits the hot T-Roc R, which boasts four-wheel drive, 296bhp and is priced at £40,445.

The rest of the lineup starts from a much more affordable £25,000. Even the base model is fairly well kitted out; 16-inch alloy wheels, Volkswagen’s Digital Cockpit presented on an eight-inch display, a separate eight-inch touchscreen with Apple CarPlay and Android Auto, adaptive cruise control and lane assist are all standard – the latter two are part of an improved suite of safety tech for the revised T-Roc.