The Enyaq Coupé successfully wraps up the qualities that make the regular model so appealing – comfort, refinement, range and even practicality – in a more visually striking package. It’s not for us to point you in the direction of a particular bodystyle but if the Coupé strikes a chord with you, the expected price premium and slightly smaller boot shouldn’t really put you off. It’s a fine addition to the Enyaq line-up, and one that is only likely to add to the already-considerable waiting list.

Anyone at Skoda who was wondering whether the Czech brand’s values could be successfully applied to a pure-electric vehicle will surely have been reassured by the sales performance of the Enyaq. Over 50,000 examples of the car have been delivered to date and the current order bank is probably a little larger than even Skoda would like, numbering more than 115,000.

So it’s perhaps not surprising that the model is being bolstered by a new Enyaq Coupé iV, designed to appeal to those who want the higher ride height, in this case accompanied by a zero-emissions powertrain, and who don’t need quite so much practicality.

The new arrival certainly has a profile that is distinct from its more conventionally shaped sibling. They’re the same up to the B-pillar, but then the Coupé’s roof tapers more noticeably towards the tailgate. It’s actually more aerodynamically efficient than the regular model.

UK customers are being offered the Enyaq Coupe with a simple range of motors and batteries. The range comprises just two variants, in fact, starting with the iV 80 we’re driving here, which has the same 201PS/310Nm rear-mounted motor as the regular Enyaq with the same designation. It can reach 62mph in 8.8 seconds and has a top speed of 99mph, and its 82kWh battery (77kWh usable) promises WLTP range of more than 335 miles. That’s actually a few miles up on an Enyaq SUV 80 – a result, we’re told, of the slightly more slippery shape.

At the other end of the spectrum, this sportier bodystyle heralds the arrival of the Enyaq Coupé iV vRS – the first time Skoda’s performance sub-brand has featured on a pure-electric vehicle. This model draws heavily on the more potent powertrain of the VW ID.4 GTX, bringing front and rear electric motors with a combined output of 295bhp and 460Nm. The raw performance stats certainly live up to the vRS branding, with a 0-62mph time of 6.5 seconds. The battery remains the same capacity, so range does take a hit, to around 309 miles. A regular-shape Enyaq vRS is expected in the second half of this year, incidentally.

Skoda’s positioning of the new model is interesting, because it’s pitching the car above the regular Enyaq. Pricing has yet to be confirmed, but we’d expect it to carry a premium of around £1,800 over the regular model when it reaches showrooms in the autumn.

For those who want a sportier look for their Enyaq Coupé, but who don’t want the price or pace of the vRS, a SportLine trim level is available. It steps up the wheel size to 20 inches (with 21s as an option) and gets the same drop in ride height – 15mm at the front, 10mm at the rear – as the vRS, as well as DCC. Other standard SportLine features include acoustic glass, different interior materials and for shrinking violets, the ‘Crystal Face’ illuminated grille, featuring 131 individual LEDs. 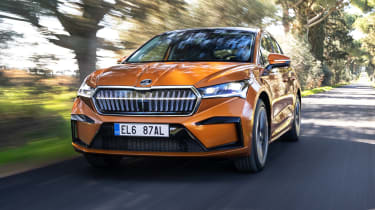 It probably won’t surprise you to hear that the Enyaq Coupé feels remarkably similar to its SUV stablemate on the road. The centre of gravity is slightly lower, of course, but not by enough to transform the dynamics; this has never been a car happy to be driven on the edge, and the same applies here. It’s at its best at a relaxed cruise, and is up for making it a swift one if you so desire. The relatively modest power output is easily overshadowed by typical electric-motor instant torque, which brings enough immediate shove to make a car the size of the Enyaq feel plenty brisk enough.

The control weights should be reasonably familiar to Skoda regulars, with front-end bite and steering response that feel similar to, say, a Kodiaq. The brake modulation takes a little acclimatisation but before long you’ll be used to the regeneration when you lift the throttle, and find yourself able to stroke the Enyaq Coupé around town with only occasional dabs of the left-hand pedal anyway.

Our test example was fitted with the optional adaptive dampers but we’d question the merit of ticking this particular box, since firming things up in Sport mode does little to improve the body control, and alerts the occupants to more of the imperfections on the road beneath. This is not a car designed to be hustled.

Leave things in Normal and the DCC-equipped Enyaq Coupé has a relaxing long-distance gait and surprising compliance at low speeds around town; it remains one of the most comfortable EVs of its size. We’ll have to see if this setting is indeed on a par with the non-DCC specification.

The cabin has the same top-notch finish as the regular Enyaq, with high-quality materials in more of the key areas than you’ll find in a VW. Skoda’s infotainment solution isn’t perfect but at least the interface makes use of the larger display to give you one-touch access to features like temperature and heated seat controls.

There’s room in the rear, too, for a couple of fully grown adults, thanks to a heat-reflective panoramic glass roof which saves headroom by negating the need for a blind. Six-footers should be comfortable.

You do sacrifice a little boot space in the name of that more aggressive roofline – but at 570 litres, the Enyaq Coupé’s outright capacity is only 15 litres or so down on the regular SUV versions. That still makes this car one of the most practical offerings in the class.