Our spies have caught the facelifted Ford Kuga SUV out testing as it prepares for its public unveiling later in 2022.  The Blue Oval has been on a new model blitz recently, with the Fiesta and Focus receiving mid-life refreshes – and now it’s the turn of the brand’s popular mid-size SUV to go under the knife.

The current third-generation Kuga has only been on sale since early 2020, but even in that short time rivals such as the Volkswagen Tiguan and SEAT Ateca have benefitted from facelifts, taking some shine off the Kuga’s showroom appeal. Yet as our new spy shots show, the rugged Ford is ready to reclaim its place at top the family SUV sector.

At the front are some design cues taken from the new Focus, with slimmer headlights and a new grille featuring the Ford badge, which has been relocated from the nose. At the rear us a new tail light design, but the twin exhausts and rear spoiler remain largely unchanged. 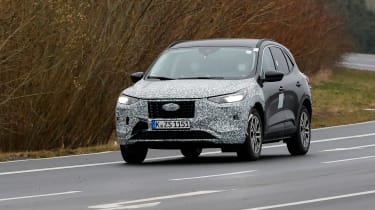 In terms of powertrains, it’s likely that the new car will retain the current model’s line-up, which means the option of a 148bhp 1.5-litre petrol with a six-speed manual, 222bhp plug-in hybrid or 187bhp mild-hybrid – the latter getting a CVT automatic transmissions. Ford canned the diesel engine from the Kuga range late last year.

There’s no word on pricing yet, but the current model starts from just under £28,000 so expect similar for the facelifted Kuga.