This mid-life update for the Focus isn’t dramatic, but the subtle styling changes on the outside are complemented by a huge boost to the in-car tech. It’s just as sharp to drive as ever, and there’s plenty of space inside, too. However, with many rivals offering some significant form of electrification – be it full EV or plug-in hybrid – Ford’s mild-hybrid set-ups are at risk of leaving the Focus behind the competition.

The Ford Focus is fast approaching its 25th anniversary, and ever since the radical first Focus hit the road, few other models have so consistently delivered such a strong all-round package in the family car segment.

With SUVs stealing sales from traditional compact hatchbacks, the fourth-generation model hasn’t quite hit the same level of popularity as its predecessors, but it remains a key player in Ford’s range. Now, the current Focus has been treated to a mid-life update that includes changes to the styling, interior and powertrain line-up.

From the outside, it’s the front end that receives the most significant updates. The Ford logo has grown and moves from the tip of the nose to the centre of a redesigned grille. It’s flanked by new lights, which are slimmer than before. These not only get a new LED daytime running graphic, but also house the foglights, which frees up space below for a cleaner bumper design.

The changes elsewhere are a little more subtle, but the back end gets refreshed tail-lights, and the alloy wheel designs are all new. Each trim level gets its own unique look, with distinct grille shapes and finishes.

The model line-up itself has been revised, too. The previous range-topping Vignale is now a more luxurious add-on pack for the core trims: Titanium, sporty ST-Line and off-road inspired Active, plus there’s entry-level Trend spec.

The changes on the outside are mostly cosmetic, but the Focus’s cabin benefits from a comprehensive tech upgrade. The centrepiece is a vast new infotainment screen running new Sync 4 software; Ford says that the 13.2-inch display is the biggest in the class. Loading times have significantly improved, and the large icons and clear graphics make it a doddle to use.

Even the on-screen heating and ventilation controls – something we often criticise in other cars for poor usability – are among the best around. Wireless functionality covers not only Apple CarPlay and Android Auto, but also enables over-the-air updates. All in, the new set-up moves the Focus’s in-car tech from an also-ran to a class-leader. 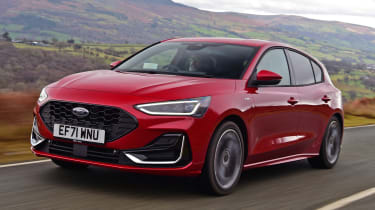 The impression from the back seats hasn’t really changed. The Focus remains towards the roomy end of the segment – not on a par with the cavernous Skoda Octavia, but better than key competition such as the Volkswagen Golf and new Vauxhall Astra.

Ford’s 1.0-litre EcoBoost engine family has been further electrified in this refreshed iteration of the Focus, with a new seven-speed automatic gearbox now combined with the 48-volt mild hybrid technology.

Here, it’s in its most potent form, producing 153bhp. That sounds like a lot on paper, but in reality it feels a little weak when compared with engines of a similar output that feature in the VW Golf and Citroen C4. That’s because it’s down on torque; at 190Nm, the Focus has 50Nm less than the C4 PureTech 155, and is 60Nm behind the VW.

A diesel option remains – the 1.5-litre EcoBlue unit makes 118bhp and returns a claimed 56.5mpg – but what the Focus lacks is any significant electrical assistance across the range. Mild-hybrid tech means the stop-start system is eager to activate at low speeds, but when the competition includes models such as the full-hybrid Toyota Corolla, plug-in hybrids from the VW Group and Stellantis, and even fully electric options like the VW ID.3 and Citroen e-C4, the Focus really needs a tax-busting powertrain to help it compete.

While the engine line-up is in need of a bigger boost, nothing needs to be done about the car’s chassis. The Focus remains one of the few everyday family cars that is fun and engaging to drive, with sharp yet well weighted steering, and a front end that turns in very keenly and offers up plenty of grip.

You might expect a ‘but’ coming up, with this keen handling coming at the expense of ride comfort, yet that isn’t the case. Yes, it’s a little firmer over bumps than some rivals, but it never feels harsh, and thumps and crashes are well isolated from the cabin. It’s not quite as refined as a Peugeot 308 in this area – and there’s a little more wind and road noise at higher speeds – but as an overall package the Ford’s chassis set-up still impresses.

The on-board safety tech has also been given a kick into 2022. Not only are those headlights of a new design, the optional matrix LED system that was fitted to our car features what Ford calls “Dynamic Pixel” tech. This brings an adaptive high beam to reduce dazzle for oncoming drivers, a dynamic bending function that aims light into a corner, and bad- weather tech, which changes the beam pattern in rainy weather to reduce glare. It’s a £950 option.

Elsewhere, the Focus gains optional blind-spot assist, which not only scans for vehicles, but can also actively steer to avoid them if necessary. This £400 extra can also be adjusted to take into account if a trailer is being towed.