The undisguised rear end of the new BMW M3 Touring has been revealed in an official teaser video from the manufacturer. The car is expected to make its debut later this year.

The G20 generation of BMW M3 will be the first to be available in an estate, or Touring, bodystyle, providing direct competition to performance estates like the Mercedes-AMG C 63 Estate and Audi RS 4 Avant.

This latest reveal from BMW comes off the back of previous teaser images and shows the quad-exit exhaust system also seen on the M3 saloon, an aggressive diffuser, a new rear spoiler and a set of BMW’s trademark “snowflake” alloy wheels.

As we’ve seen on previous spy shots, the new BMW M3 Touring will feature the same vertical kidney grilles used to controversial effect on the new M3 and M4. There’ll also be the same range of aggressive styling cues found on the new M3, including a deep front splitter, flared wheel arches and broader side skirts. 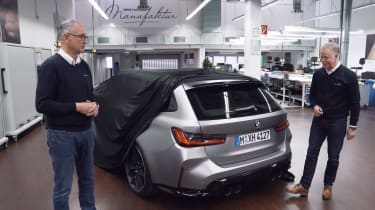 BMW recently confirmed that the new M3 Touring will be powered by a twin-turbocharged six-cylinder petrol engine. It’ll be the same 3.0-litre powertrain found in the X3 M and X4 M performance SUVs – which should give the hot M3 estate an output of 503bhp and 600Nm of torque. Just like the M3 and M4, we’re likely to only see the Competition version offered in the UK with an eight-speed automatic torque converter gearbox.

The M3 Touring will also feature the same selectable four-wheel drive system as the M3 saloon, which will allow the driver to send 100 per cent of the engine’s power to the rear wheels. We could eventually see a four-wheel drive xDrive variant, too. BMW also confirmed that the hot estate will have a wider track than the standard model, which will be complemented by an uprated suspension system.

To cope with the power, the Touring will feature an enormous set of drilled and vented brake rotors, gripped by beefy six-piston calipers. Like all performance BMWs, the car’s alloys will be wrapped in sticky Michelin Pilot Sport 4S tyres.

The upcoming M3 version of the 3 Series estate will be the spiritual successor to BMW’s prototype E46 generation M3 Touring, which made its debut in 2000 and also makes an appearance in the latest video. The fully functioning one-off model was powered by the same 338bhp straight-six engine as the M3 Coupe of the day, but due to production costs BMW never brought the model to market.

Check out the latest BMW news and reviews here…