Audi is set to bring its line of large, luxurious estate cars into the electric age with this: the A6 Avant e-tron. Shown here in concept form, the A6 Avant e-tron will bear a close resemblance to this show car when it lands in production from in 2024.

The A6 Avant e-tron concept is a more practical iteration of last year’s A6 e-tron concept executive saloon, and is set to go on sale alongside a combustion-engined variant.

The car sits on the same Premium Platform Electric (PPE) platform as the forthcoming Q6 e-tron SUV (and the A6 e-tron production car) which has been co-developed with Porsche. It utilises an 800V electronic architecture that enables rapid charging at up to 270kW, meaning a 5 to 80 per cent charge takes less than 25 minutes, while plugging in for 10 minutes can provide an extra 186 miles of range.

As per the A6 e-tron concept, the Avant revealed here is powered by a battery that holds “around 100kWh of energy”, and this will be true of the production version too. The c. 100kWh unit will stand as the largest battery offered on both the A6 e-tron and Avant e-tron, and despite a slightly higher drag coefficient than the saloon Audi claims up to 435 miles should be possible on a charge from the Avant e-tron concept. Expect this figure to remain for the production model.

This concept features a dual-motor set-up for quattro all-wheel drive and a total of 469bhp and 800Nm. This powertrain will also be offered when the car goes on sale in a few years time and delivers a 0-62mph time of “less than four seconds.”

However, Audi has confirmed that a less powerful and more affordable single-motor model will also be offered; this will serve up the most driving range in the line-up and should still deliver a 0-62mph time of less than seven seconds.

The A6 Avant e-tron concept’s styling closely follows that of the saloon version revealed last year, with a design language that previews forthcoming electric Audis. At the front, there’s a large ‘Singleframe’ grille that incorporates contrasting black graphics and side cooling vents for the motors, battery and brakes, with an illuminated Audi badge. 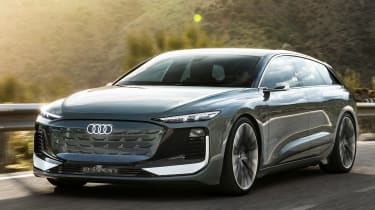 The headlights are incredibly slim, digital matrix LED items that use projection technology. Similar to the A6 e-tron concept, when parked this prototype Avant can display videos onto a wall to allow passengers to play games, for example. Numerous LED projectors around the car also allow signals, messages and lighting effects to be shone onto the ground – including information on direction changes related to indicator inputs to improve safety for cyclists and pedestrians. The door mirrors are slender, digital units.

The A6 Avant e-tron concept is fitted with a set of 22-inch diamond-cut alloy wheels, and the clean, uncluttered body surfacing is a departure from current Audis, with a rising waistline and muscular haunches along the side of the car. There’s more black accents for the sills and A-pillars, which are highlighted by a silver trim strip that extends along the roofline to the rear spoiler.

The rear window is heavily tapered, and there’s a full width OLED tail-light bar that can display a variety of 3D light signatures and graphics. A deep rear diffuser funnels air from underneath the car and is painted gloss black, with contrasting silver accent trim.

This concept car features air suspension and adaptive dampers, which are expected to make their way to the eventual production model, and the new PPE underpinnings should help maximise space inside.

Audi has not yet revealed images of the concept’s interior, but the A6 Avant e-tron concept is nearly five metres long and 1.96 metres wide, with a relatively long wheelbase and short overhangs that provide more legroom for passengers, the brand says. As with other electric cars, the lack of a transmission tunnel should add to the spacious feel.

Audi hasn’t detailed the A6 Avant e-tron’s boot capacity – key to any estate car – but it is set to be a more versatile machine than the saloon, and the floor-mounted battery pack should allow for a flat load area. The production car will also have a front boot for extra carrying space.

The A6 Avant e-tron will arrive in 2024, following the launch of the saloon variant in 2023. Audi will sell these electric models alongside ICE-powered equivalents, and promises to keep pricing broadly in line with its equivalent combustion-engined cars. A high-performance RS6 e-tron is expected to appear later down the line, too.