Hyundai is set to adopt a more aggressive chassis approach with its forthcoming Ioniq 5 N model to make it a large EV hot hatch, Auto Express has learned.

The hotter version of our reigning Car of the Year is expected to make its debut in 2023, and has been spied with increasing frequency near Hyundai’s test base at the Nurburgring. It’s widely tipped to get the same dual-motor configuration as Kia’s new EV6 GT, which has 577bhp.

But a senior source close to the project has told Auto Express that while the two vehicles may well share a powertrain as well as the E-GMP platform, the aim is for them to be very different in character. “With the N you won’t see maybe so much change on the power side,” our insider said, “but the chassis will be very different. With the Ioniq 5 we’ve been working particularly hard on body control – rebound rates and so forth.” Hyundai’s N engineers are also said to be experimenting with more aggressive settings for the electronic limited-slip differential than those adopted on the Kia.

This appears to suggest that the N division is working to overcome the Ioniq 5’s inherent EV mass and keep it in character with the original N models, the i20 N and i30 N, which have much tighter body control and greater agility than their conventional stablemates. 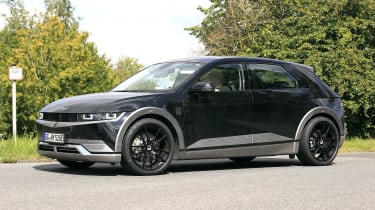 Hyundai has been spotted testing the new Ioniq 5 on a number of occasions. These spy shots seem to show a mysterious Ioniq 5 prototype with little to separate it from regular versions of the car. The only giveaway is the fitment of lightweight alloy wheels shod with high performance Pirelli P Zero tyres.

Auto Express has known of the Hyundai N division’s plans to develop a high performance electric car based on a model from the new Ioniq sub-brand for a while. We broke the news based on quotes from the Korean manufacturer’s head of technical development and Hyundai management’s suggestion that N’s focus will shift towards more sustainable, environmentally friendly models.

Hyundai’s vice-president for product and strategy, Thomas Schemera, told us early in 2021: “We never stop thinking about expanding our product portfolio. Strategically we are moving full speed ahead with eco-friendly offerings. We have a crystal clear plan. One thing is for sure – eco-friendly vehicles are on our priority list, at the top.”

When asked specifically if N would look to develop cars based on the Ioniq models, which use Hyundai’s e-GMP modular electric platform, Schemera said, “Everybody knows that Hyundai’s electric architecture has a lot of potential and shows a lot of flexibility. So this is an interesting question. I guess if you have a look at our strategy of the future, to offer more eco-friendly vehicles and moving ahead with our battery-electric concept and our fuel cell-electric concept, it seems to be realistic.”