The sharp, ultra-modern look of the Kia Sportage is a bold move from the Korean manufacturer, but one that should at least help its family SUV stand out from a slew of all-too familiar rivals. Elsewhere, the Sportage has been improved in all the right areas – there’s more passenger room, a bigger boot, a stunning new infotainment system and a choice of efficient hybrid engines, including plug-in technology for the first time.

The Sportage doesn’t provide that much entertainment out on the road, but then that’s missing the point; comfort and refinement are excellent, while Kia has added extra practical touches to make its best-selling SUV even easier to live with.

Kia has a successful history of producing capable family cars, built with practicality, efficiency and reliability firmly in mind. More recently the manufacturer has introduced a raft of electrified powertrains to further boost its appeal with customers looking to reduce day-to-day running costs, and the fifth-generation Sportage SUV is the latest model to benefit from mild, full and plug-in hybrid technology across its range.

The Sportage has evolved over the past thirty years or so, from a bland, agricultural SUV which sold in relatively low numbers, to a stylish family favourite that has become the Korean automaker’s best-seller in the UK. The third-generation model, launched in 2010, showed the way forward, with its handsome looks and useful practicality helping to steal buyers away from the all-conquering Nissan Qashqai.

Fast forward to the present day and Kia hasn’t forgotten the importance of bold design – its all-electric EV6 crossover is a real head-turner, while the quirky-looking Soul EV has a distinctive look that means it won’t get lost in the crowd. It’s a style theme that the Sportage continues, with a striking front-end and modern, clean surfaces that actually make the bigger fifth-gen model feel quite compact.

With a huge number of modern-looking rivals in the mid-size SUV market, the Sportage will have its work cut out. The Hyundai Tucson is based on the same N3 platform as the Sportage and is our current mid-size SUV of the Year, while the Volkswagen Group offers up excellent competition in the form of the SEAT Ateca and Skoda Karoq.

If you’re after more driving fun, then maybe look towards the Ford Kuga or Mazda CX-5, with the former offering efficient full- and plug-in hybrid models. As mentioned above, the Nissan Qashqai has previously been a popular choice for family buyers, although has maybe lost a little of its shine with the arrival of more talented opposition. In this competitive class, it would also be hard to recommend either the Honda CR-V or the Vauxhall Grandland. Neither are particularly bad choices, it’s just that other rivals offer a more complete package. 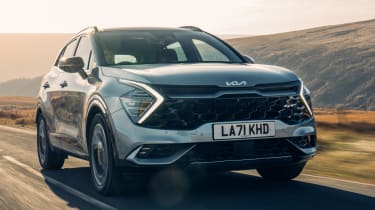 Kia provides regular petrol and diesel powertrains in the Sportage lineup, with 48V mild-hybrid versions also included in the range. The 148bhp 1.6 T-GDi petrol unit is available with a six-speed manual gearbox, or a seven-speed DCT automatic transmission, while the 1.6 CRDi oil-burner is offered with a choice of outputs: a 113bhp version paired with the six-speed manual ‘box, or a 134bhp variant matched with the seven-speed automatic.

The Sportage hybrid and plug-in hybrid models provide more power, with 226bhp and 261bhp, respectively. Both use a six-speed automatic transmission, with the PHEV versions benefiting from all-wheel-drive as standard.

Kia offers the Sportage from around £27,000, although prices climb quickly with the top-spec cars over £40,000. We’d advise taking some time to compare and contrast the Sportage to the mechanically-similar Hyundai Tucson which provides a slight price advantage as you move up the range.