The Ford Focus is one of the mainstays of the British car market, and it’s easy to see why. The well-judged chassis delivers a composed, comfortable and enjoyable drive on UK roads, with excellent body control and responsive steering. The engines – particularly the 1.0-litre EcoBoost 125PS version – are punchy enough but also refined.

And the latest Mk4 Focus has better cabin space than its predecessors, plus quality that’s pretty much a match for the best in class. With keen pricing and finance offers sealing the deal; the latest Focus should be on the shortlist of any buyer looking for a new hatchback.

The Ford Focus was a game changer when it hit the market at the end of the 1990s, offering a blend of style, practicality and driving characteristics that were a step-change from the often porridgy hatchbacks around at the time.

There have been four generations of Focus now, and twenty years on it’s still one of the best family all-rounders that money can buy. The success of the Focus is reflected in its name. Ford’s engineering and marketing departments have stuck rigidly to the blend of characteristics that underpinned the original model’s appeal. As such, the latest Focus is as entertaining and pleasurable to drive as it is practical and affordable to own.

The current line-up is offered in a trio of body styles that includes the established five-door hatch and estate models. They’re joined by the Active variant that seeks to cash in on the ‘crossover SUV’ craze, and features a slightly raised ride height and extended wheel arches.

While the first Focus had some very well-established rivals to unseat, including cars  such as the Vauxhall Astra, VW Golf and Honda Civic, the breadth of competition is much wider today. The list of desirable contenders vying your cash now includes European rivals like the Renault Megane, Peugeot 308, SEAT Leon and  Skoda Octavia, as well as impressive challengers from East Asia like the Mazda 3, Kia Ceed and Hyundai i30. You’ll probably also want to take a look at some ostensibly more premium rivals, including the Mercedes A-Class, BMW 1 Series and Audi A3 Sportback.

The Mk4 Ford Focus certainly has the image to mix it with those more upmarket brands. The new design brought with it significant improvements in cabin space and practicality, but it has arresting looks too. There’s a longer wheelbase, which improves space inside, while the cabin has been overhauled to create more room, too. The current Focus has a far bigger boot than the previous generation as a result, while an electric parking brake and revised cockpit means the front seats feel spacious, and the rear has decent legroom, too.

A facelift in 2022 saw exterior styling tweaks, further electrification to the engine range and a complete overhaul for the onboard tech and infotainment system.

It’s at the front-end where the most noticeable changes have taken place; the Ford blue oval logo is bigger and now sits within a restyled grille, while the headlights have a more svelte look and now incorporate the foglights in a one-piece design. The tail-lights have also been updated, along with a new choice of alloy wheels.

All Focus models are front-wheel-drive, and petrol power for the core range comes from the 1.0-litre EcoBoost engine, available either in standard 123bhp form, or versions with 48v mild-hybrid technology producing 123bhp and 153bhp. A six-speed manual gearbox is offered with the non-hybridized 123bhp version, while the mild-hybrid variant uses a seven-speed auto transmission. If you opt for the 153bhp petrol car, you’ll have the choice of either the manual or the auto, while the sporty 2.3-litre ST model delivers its 276bhp via a six-speed manual or seven-speed auto gearbox, too.

Ford has ditched its 148bhp 2.0-litre diesel engine, with the 118bhp 1.5-litre unit now the sole oil-burner in the Focus range, paired with an eight-speed auto.

The Focus range was revised in late 2019; entry Style trim was ditched, with Zetec kicking things off instead. Updates included in the 2022 facelift mean that specifications have been realigned once more: Trend is now the starting point in Focus ownership, followed by Titanium, Active and ST-Line. A Vignale pack is also offered as an upgrade to each trim, with the exception of Trend cars. 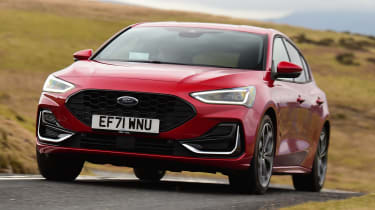 Opting for the Vignale pack brings the 12.3-inch digital instrument display, while Titanium-trim and above includes a new 13.2-inch infotainment screen, running Ford’s new Sync 4 system. Prices start from around £23,000, and rise to almost £30,000 for the top-spec ST-Line Vignale hatchback, while the sporty ST model is around the £35k mark.

Traditional family hatchbacks are coming under increasing pressure, with buyers appearing to favour stylish, high-riding SUVs instead of the long-established five-door hatch. This doesn’t mean that used examples of Ford’s iconic family car will be too hard to come by, however, as it’s been on sale since 1998 and manufactured in a variety of body styles: three- and five door hatchbacks, a four-door saloon, a more practical estate model, a soft-top Coupe Cabriolet and even off-road inspired Active versions

The Focus RS model sets the standard for performance, but you’ll find a huge choice of capable petrol and diesel-engined cars further down the range, while equipment levels even on lower-spec Zetec models is pretty generous.

A tidy Mk3 Ford Focus could prove to be a smart buy: good to drive, with decent engines and strong levels of kit, the package is made all the better by the model’s keen pricing. Supply shouldn’t be an issue as lots of examples reside on dealer forecourts, while many more are available via car supermarket-style outlets and through private sale.

Yes, the Volkswagen Golf is a little more refined and offers solid residual values, but in terms of bang for buck, the Focus is a great all-rounder. The 1.0-litre petrol cars will be cheap to run, while opting for diesel power means you’ll benefit from excellent economy. Read our full Mk3 Ford Focus buyer’s guide here…

Buying a mainstream car that is over ten years old means that you’ll probably have a strict budget in mind. The second-generation Focus was a sales success, so there will still be lots of examples to choose from and most should be pretty affordable.

Look out for post-2007 facelifted cars which included a style makeover and an upgraded interior, while the 2.5-litre Focus ST model could prove to be a performance bargain for the keen driver. Read our full Mk2 Ford Focus buyer’s guide here…

Launched in 1998, the Mk1 Focus was a replacement for the lacklustre Escort model and immediately set new standards for driving dynamics in the family hatchback class. Its obvious qualities were recognised when it was awarded the European Car of the Year title in 1999, and its sharp styling still holds up today.

For an alternative view of the Ford Focus, why not visit our sister site carbuyer.co.uk…