As part of its annual results conference BMW has confirmed that it will offer a fully electric 3 Series model as part of its electrification ramp-up, which will see 15 EVs in production by the end of 2022.

The brand has raised its targets when it comes to electrification and outlined that: “This year, including pre-production vehicles, the company will already have 15 fully-electric models in production – covering around 90 per cent of its current segments.

“In addition to existing models like the BMW i4, BMW iX and MINI Electric, this also includes four high-volume BMW model series: the BMW 3 Series and BMW 5 Series, the BMW X1 and the BMW X3. The new BMW 7 Series also has a special role to play in 2022, with the launch of the new BMW i7.”

However, while it’s inevitable that a fully electric BMW 3 Series for Europe will join the range in time, for now this model will be limited to the Chinese market only.

BMW confirmed it will launch a production version of the fully-electric long-wheelbase 3 Series for China this year, a car which was leaked last year through images from the Chinese patent office and which Auto Express’s spy photographers have previously caught testing.

The new stretched electric 3 Series – thought not to be badged i3 in China, as per the brand’s convention in Europe for its electric models – will rival the Tesla Model 3, as well as Citroen’s upcoming flagship C5 X electric saloon.

BMW originally submitted these undisguised pictures to the Chinese patent office as part of the verification process for the country’s intellectual property register, but they’ve now worked through the government body’s defences and into the public eye. 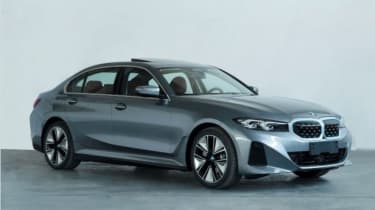 Cosmetic revisions over the standard 3 Series are fairly minimal. Up front, there’s a blanked- off radiator grille and a new bumper, with similarly narrow side intakes to the iX3 SUV. The rear end has also been tweaked, with the addition of a new diffuser element that does away with the standard car’s exhaust outlets.

The electric 3 Series also has slightly deeper side skirts, which help reduce the visual mass created by housing the car’s battery back in the floor. To maximise range from the system, there’s a set of aerodynamically efficient alloy wheels, too.

BMW hasn’t yet disclosed what’s powering the electric 3 Series, but we expect it’ll feature the same electric motor and battery pack as the i4 four-door coupe. Both cars are based on BMW’s modular CLAR architecture, so it is possible that the electric technology from the i4 will fit with minimal modifications necessary.

Currently, the i4 is available with a choice of two powertrain options, called eDrive40 and M50, both of which are powered by the same 81kWh battery pack. The former option uses a 335bhp electric motor mounted on the rear axle, which offers a 0-62mph time of 5.7 seconds and a top speed of 118mph.

The high-performance i4 M50 features an extra electric motor on the front axle, which bumps power up to 537bhp and adds four-wheel drive. As a result, the car’s 0-62mph time drops to 3.9 seconds, while top speed increases to 140mph.

BMW’s eDrive40 variant can cover 367 miles between charges, while the M50 claims 316 miles. All of these performance and range figures should also be comparable across the i4 and the electric 3 Series due to their similar sizes and weights.

What do you make of the upcoming all-electric BMW 3 Series? Let us know in the comments section below…