BMW will unveil its new luxury flagship 7 Series saloon on the 20 April – and for the first time it will be available as a full EV, badged i7, alongside plug-in hybrid and pure-combustion models.

A bright white outline of the front grille is obvious in the teaser shots, with BMW confirming the new car will feature an “illuminated contour of the kidney grille.”

Inside, BMW’s teasers show that the firm’s 31-inch Theatre Screen projector system first previewed at the Consumer Electronics Show in January will make its debut on the i7/7 Series offering a 32:9 screen with 8K streaming resolution, while the dash will feature a minimalist look dominated by a pair of curved screens, as per BMW’s iX.

A bright white outline of the front grille suggests that the production car may well feature some form of illumination for this design element, as per the brand’s X6 SUV.

The brand also confirmed that the i7 will use that car’s fifth-generation eDrive battery and motor systems, although it stopped short of confirming specifications. BMW CEO Oliver Zipse did say that the new car represents “tech magic at its best”, fitting in with much of the above.

As a rival to both the Mercedes S-Class and EQS ICE and EV limousines, the 7 Series will be the only luxury saloon model offered with both combustion engine and all-electric power, Zipse said. Read on below to see what powertrains we expect the car to feature.

The seventh-generation car will launch on 20th April and our exclusive images preview how it could look, highlighting much of the detail teased by BMW in its official shots. 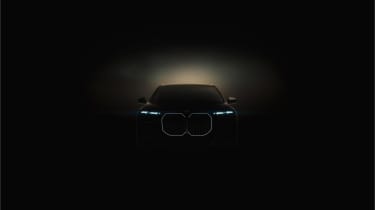 The new luxury flagship saloon will use an updated version of the modular CLAR architecture employed on the current 7 Series, as well as the majority of other BMWs offered with rear-wheel drive. The platform is adaptable, allowing for its use in two of the brand’s latest EVs (the iX and i4), as well as the forthcoming i7.

BMW will introduce a distinctive new headlight design that moves the model away from other saloons, such as the 5 Series. The current car’s combined daytime running lights and main headlamps will be ditched in favour of split units, with the latter located down in the bumper.

As is customary on recent BMWs, the next 7 Series will feature huge kidney grilles, while the streamlined nose and fluted bonnet references the iX SUV. Buyers of the new luxury limo will also be able to choose between standard and long-wheelbase layouts.

The rear of the new 7 Series is a little more conventional, with changes including a taller, reshaped bootlid and new, slimmer tail-lights. Higher-spec petrol or diesel-powered models will also be fitted with a recessed twin-exit exhaust system that’s set into a diffuser element in the rear bumper.

BMW is yet to detail technical specifications for the 7 Series, or the electric i7 for that matter. We expect the model to continue to be offered with a range of 3.0-litre six-cylinder engines utilising 48v mild-hybrid tech to improve efficiency. Diesel power will be offered, too, with BMW chairman Oliver Zipse confirming four different drive technologies will be available.

Diesels could be badged 730d and 740d, with a 745e straight-six petrol plug-in hybrid option also on the cards. But expect significant gains in all-electric range and efficiency for this newly updated model.

It’s probable that a V8 petrol engine will return for the 750i model, too, although emissions regulations have killed off the flagship V12, in Europe at least.

The i7’s fifth-generation eDrive technology means a 105kWh battery from the iX is possible, which in this lower, more aerodynamic model will deliver up to a claimed 610km (379-mile) range.