BMW’s has released a teaser image of its forthcoming, electric-powered iX1 SUV, which will go on sale towards the end of next year.

The new iX1 will be the entry point to the Munich firm’s electric SUV, and will sit alongside the latest generation of ICE-powered X1, which is due to make its debut later this year.

BMW has claimed the all-electric iX1 will hit showrooms in late 2023, by which time it’ll have plenty of rivals, ranging from the upcoming electric Alfa Romeo SUV, Cupra Tavascan, Kia EV4, to the existing Volvo XC40 P8 Recharge and Mercedes EQA.

This latest image shows traditional BMW styling cues, as well as some newer ones that we’ve already seen on other electric BMW’s. The kidney grille is squarer and has smaller dimensions compared to the new BMW i7 and iX , plus they get a blue trim line surrounding them that’s similar to the i3. Another blue streak lines the lower vent (likely to be blanked off in the iX1), plus there’s the trademark dual headlight design used on most other BMW models.

The current X1 received a mid-life facelift back in 2019, which means the electric iX1 will form part of the next-generation X1 line-up that’s due next year. Any specifications for the iX1 are still yet to be confirmed, but we expect the new model will be based on a heavily reworked version of the current X1’s UKL platform.

BMW has already developed an electric version of the underpinnings, which prop up the MINI Electric. However, the iX1 should feature the company’s next-generation EV system, (as seen on the iX3), granting access to a 282bhp motor if required, and battery technology that should easily see the EV’s range surpass 200 miles and towards the figures of rivals from Volvo and Mercedes. 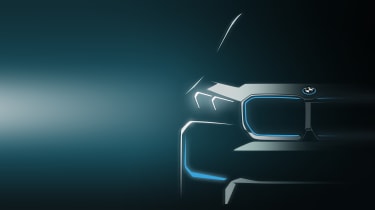 With its next X1, BMW will aim to cater for as many buyers as possible, adopting the same “Power of Choice” strategy it’ll employ on the next 5 Series and 7 Series. It means alongside the EV there will be petrol and diesel mild-hybrid options, plus a plug-in hybrid model.

Like the BMW iX3 and its combustion-engined counterpart, we think the pure-electric iX1 will look near-enough identical to the new X1, with the only noticeable differences being a blanked-off radiator grille and re-shaped rear valance, which does away with an exhaust cutout.

The production car should also feature a couple of blue highlights, some aerodynamically efficient alloy wheels and unique badges to signal its eco credentials.

BMW’s decision to expand its electric fleet forms part of the Group’s wider measures to reduce its overall carbon footprint. By 2030, BMW aims to lower its supply chain CO2 emissions by 20 percent over 2019, while an 80 percent drop in emissions from its factories and other sites is targeted by the same date.

The company also aims to deliver two million fully electric vehicles by the end of 2025 and by 2030 it wants to have at least half of its global deliveries to be BEVs.

Check out the latest on BMW’s electric 7 Series here