This is the first undisguised look at the new Maserati Grecale SUV. The company’s new baby SUV will debut on 22 March, becoming a direct rival for the Porsche Macan, as well as other premium crossovers such as the BMW X3 and Jaguar F-Pace.

These new images confirm key design details that we’ve already seen on prototypes. The car appears to mould some of the design cues from the larger Levante SUV and the MC20 supercar into a mid-size SUV package.

Its front end features the same broad grille and floating Trident common to all of Maserati’s vehicles along with a headlight design similar to the new MC20.

The rear looks a lot like a shrunken version of the Levante, with a strip of chrome that feeds into the light clusters. Meanwhile, the quad-exit exhaust system and diffuser are also reminiscent of what’s found on the Grecale’s larger sibling.

In profile, the Grecale’s shape is similar to the Levante’s, despite the reduction in length to around 4.7 metres. However, the steeply sloping windscreen and rakish rear end mean the car will straddle the gap between a traditional two-box SUV and fashionable coupe-SUV competitors such as the BMW X4 and Mercedes GLC Coupe.

The car’s front wings also feature Maserati’s trademark tri-vent outlets and like the rest of Maserati’s lineup, there’s a Maserati badge sitting on the rearmost pillar.

Maserati hasn’t made any official announcements about the Grecale’s mechanicals, but we expect it’ll be based on the same underpinnings as the Alfa Romeo Stelvio. That means it’ll side step any engineering assistance from the likes of Peugeot and Citroen, as it’ll be built on the wholly FCA-developed Giorgio platform. 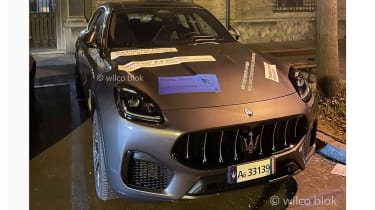 However, the Grecale won’t necessarily adopt the Stelvio’s engine. It’ll probably be powered by the same twin-turbocharged 3.0-litre V6 petrol engine found in the MC20 supercar from launch – although performance figures for that engine in the SUV are yet to be confirmed.

Maserati’s Nettuno engine is capable of producing up to 622bhp and 730Nm of torque, but we expect the brand’s engineers will detune the V6 for use in the Grecale.

Eventually, Maserati will also offer the Grecale with a pure-electric powertrain on an adapted platform. Power and torque figures for the electric model are yet to be confirmed, but Maserati has previously suggested that the architecture will feature 800-volt battery technology (like the Porsche Taycan) and support up to 300kW rapid-charging.

From 2022, all of the company’s pure-electric models will carry the “Folgore” suffix which translates from Italian into English as “lightning.”

To bridge the gap between the two extremes, Maserati will also offer a range of hybrid powertrains. Again, specifications are unconfirmed, but one option available to Maserati is the 325bhp 2.0-litre mild-hybrid petrol engine from the Ghibli.

Maserati has also set a number of targets for the Grecale. The company claims it will have the greatest top speed of any SUV in its class, while also being the fastest accelerating, best handling and most spacious. Ambitiously, Maserati also plans to go up against the Germans in terms of technology, claiming the Grecale will offer the best in class sound system, too.

Maserati is well aware of the public gaps in knowledge about its new SUV. The camo wrap on the company’s latest prototype images features a tongue-in-cheek message that reads: “I’m the Maserati Grecale. I can’t tell you much more.” The brand teaser campaign also promises that “all of the missing information will be provided on 22nd March.”

The Grecale will be built at Maserati’s Cassino plant in Italy, with the firm planning an €800 million (around £690 million) investment to set up the facility for the car’s production.