Designed specially for the new Gran Turismo 7 racing game, the Vision Gran Turismo Roadster is an all-electric single-seat Jaguar race car with plenty of nods to the Le Mans-winning D-Type.

While the 2019 SV concept was turned into a real life scale model, the new Roadster and Coupe will unfortunately stay as a virtual concept. 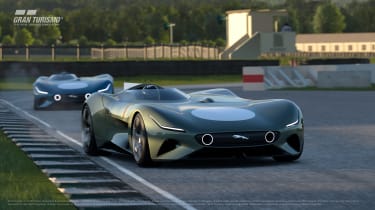 Unlike the futuristic SV, the retro Roadster features a single seat next to the covered canopy with a swept-back aero screen in place of the windshield. There’s also an ‘aerodynamically-optimised’ fin which Jaguar says enhances stability with minimal drag. Less obvious retro details include leather straps on the front wings, an LED illuminated Union Jack etched into the fin and roundel lights in the grille.

Exterior Designer within the Jaguar Advanced Design team and keen gamer, Oliver Cattell-Ford, said: “Since the reveal of the Vision GT Coupe in 2019 and Vision GT SV in 2020, we wanted to curate the perfect way to present the full line-up of the three cars together when we revealed the Roadster – Gran Turismo 7 is the perfect way to do it.”

Sitting underneath that svelte, open-cockpit bodywork are three electric motors which combine to produce 1,006bhp, sending power to all four wheels – the same system as in the coupe model. Jaguar says 0-60mph is achieved in less than two seconds and the Roadster will have a top speed of more than 200mph.

In comparison, the SV concept utilises an extra battery to produce 1,876bhp giving it a 0-60mph time of 1.65-seconds and a top speed of 255mph – making it one of the fastest cars in Gran Turismo 7.