Vauxhall recently announced its ambition to become an all-electric carmaker by 2028, and part of this plan will involve the resurrection of the Manta name after a nearly 40-year hiatus. The original Manta was badged as an Opel – Vauxhall’s European sister company – and was a sports coupe designed to compete with the likes of the Ford Capri.

The upcoming Manta is still technically a coupe, but it will be going the way of another former sporty coupe, the Ford Puma, and will become a raised-up crossover. It is most likely that the new Manta’s design will closely follow the styling of the Manta-e concept that was revealed by Opel in 2021. If so, this will make it a rival for other electric compact SUVs such as the Tesla Model Y and Volvo C40 Recharge.

Vauxhall had previously triggered speculation that the electrified Manta would be more similar to the original seventies model, when it revealed the one-off Manta GSe ElektroMOD last year. This restomod car was a modern reimagination of the original rear-drive Manta, powered by a 145bhp electric motor and featuring a four-speed manual transmission.

The upcoming Manta SUV will very likely be a far more conventional electric vehicle in terms of drivetrain. However, there is a possibility that a focus on driver engagement and bold styling cues could help Vauxhall to make the Manta a car that appeals to enthusiasts – just like the original. 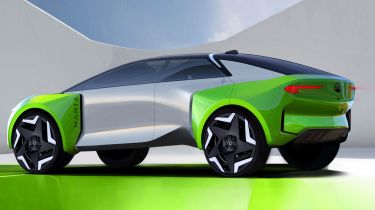 With respect to the new Manta’s platform, this is yet to be confirmed but Vauxhall’s parent company Stellantis has said it plans to base its upcoming EVs on four new, dedicated vehicle architectures.

These will be called STLA Small, Medium, Large and Frame. Depending on size, the Manta-e’s return in 2025 means it could be based on the STLA Medium platform, which would fit with Stellantis timescales when it comes to the roll-out of this technology.

The automotive group has previously outlined that STLA Medium will offer up to 440 miles of range.