The Renault Megane E-Tech Electric has been awarded a full five-star safety rating by Euro NCAP, in the car safety body’s first round of crash test results for 2022 that also included many other new models.

The Volkswagen Taigo coupe-SUV and facelifted Polo supermini, the latest iteration of the Lexus NX and BMW’s 2 Series Coupe were all assessed by the safety body alongside the Renault and were all awarded the same five-star safety rating as the Megane E-Tech Electric.

In contrast, the BMW 2 Series Coupe – which was also put through its paces by Euro NCAP – was given a still-respectable four-out-of-five-star score. Euro NCAP attributed this partly down to the car’s autonomous emergency braking system, which performed adequately in testing scenarios involving cars and pedestrians but was less effective in situations such as a cyclist crossing the road.

In its assessment Euro NCAP awarded the Megane E-Tech Electric the highest-possible rating, with the car performing particularly well for passenger protection. For the adult occupant category, the Megane earned an 85 per cent score, and the child passenger rating was even better at 89%. 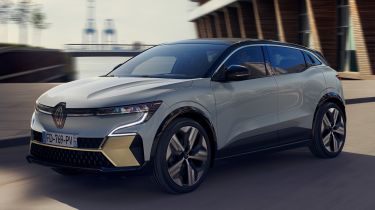 The car’s safety assist tech was rated well at 79 per cent, while the vulnerable road user protection score was rated at 65 per cent. The Megane E-Tech Electric’s strong performance overall comes in stark contrast to the electric Renault Zoe supermini’s Euro NCAP results, which grabbed headlines when it was downgraded in December 2021.

In that test, the Zoe performed poorly across the board (especially in the safety equipment category, where it scored 14 per cent), and contributed to the Zoe becoming only the third car to ever be awarded a zero-star safety rating by Euro NCAP.

In response to the Renault Zoe’s 2021 crash test performance, Euro NCAP’s Secretary General, Michiel van Ratingen, criticised Renault for the Zoe’s “disappointing results”, going on to say: “It is cynical to offer the consumer an affordable green car if it comes at the price of higher injury risk in the event of an accident.”