The Volkswagen T-Roc has been given a mid-life update. This refreshed version of the Golf-sized SUV is now on sale in the UK, with prices starting from £25,000. What’s more, the T-Roc Cabriolet and hot T-Roc R versions are also offered, from £30,530 and £40,445 respectively.

The T-Roc has proved a popular model for Volkswagen, with more than one million examples sold globally since its launch in 2017. The company hopes this facelifted model will continue that trend, especially now that it’s competing with fresher rivals such as the Honda HR-V and the Toyota Yaris Cross.

The exterior design has been updated with new bumpers front and rear, revised LED headlights with a new lighting strip running across the grille, plus darker tail-lights with dynamic indicators. There’s also a new selection of paint options, along with a choice of refreshed alloy wheel designs ranging from 17 to 19 inches in diameter.

The subtle exterior changes contrast with the updates inside, where some of the biggest changes have taken place. The updated T-Roc has received an entirely new dashboard and switchgear layout, along with a selection of higher-quality materials. There’s a new steering wheel, too, behind which sits a fully digital gauge cluster that’s now standard across the range.

All models now feature Volkswagen’s Ready 2 Discover infotainment system with an eight-inch touchscreen . The screen is also housed in a new “floating” mount, with horizontal air vents integrated beneath. The climate control switchgear has also been replaced with touch-sensitive sliders, as found in the Golf.

The surface of the dashboard is now made of foam cushion, replacing the soft-touch plastics seen previously. In the T-Roc R this is colour-coded in the performance division’s trademark blue shade.

Tech includes IQ.Drive Travel Assist – Volkswagen’s latest driver-assistance system. It can take control of the car’s steering, throttle and brakes on the motorway at speeds of up to 130mph, providing the driver supervises and keeps hold of the steering wheel.

Depending on your chosen trim level, the T-Roc is available with a choice of three petrol engines or two diesels, but no plug-in hybrid. The range opens with a 108bhp turbocharged 1.0-litre three-cylinder petrol unit, moving up to a 148bhp 1.5-litre four-cylinder and a 187bhp 2.0-litre four-cylinder. 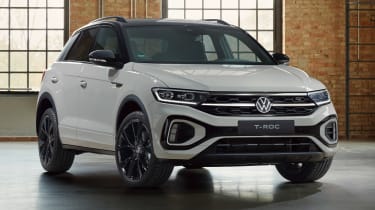 The two diesel engines are both based on the same turbocharged 2.0-litre four-cylinder unit, and are offered in outputs of either 113bhp or 148bhp. Depending on the model, buyers also get a choice of either a six-speed manual or seven-speed dual-clutch automatic gearbox.

The T-Roc Cabriolet is available with the 1.0-litre and 1.5-litre petrols, while the hot T-Roc R continues with a 296bhp turbocharged 2.0-litre four-cylinder petrol and four-wheel drive.

Including the sporty R specification, the T-Roc’s European range is separated into five models. We’re expecting Volkswagen to make some minor changes for the UK market, but specifications for the car should be broadly similar.

The T-Roc Life is the lowest spec on sale, and this gets 16-inch alloy wheels, puddle lighting, a leather steering wheel and centre armrests. The T-Roc Style builds on this specification with 17-inch alloys, two-tone paint, and some extra chrome trim for the radiator grille and rear bumper.

The Volkswagen T-Roc R-Line gets a sporty body kit inspired by the T-Roc R, along with 17-inch R-badged alloy wheels, a sports steering wheel, aluminium pedals and sports seats, which are trimmed in Volkswagen R upholstery.

The range-topping T-Roc R looks similar to the R-Line variant, albeit with larger 18-inch alloy wheels, Matrix LED headlights, premium sports seats trimmed in ArtVelours and Piano Black trim for the dashboard. There’s also a quad-exit exhaust system to set the model apart from its peers.

What does the new Volkswagen T-Roc have to beat? Check out our list of the best SUVs on sale now…