After a mixed start to life on our fleet, the Nissan Qashqai is really coming into its own. It’s full of clever ideas to make family life that little bit easier, but it’s the sheer amount of space that impresses most.

Our Nissan Qashqai has been leaving me confused. How can a car that doesn’t appear to be that big from the outside, feel so cavernous on the inside? It’s almost as if the external dimensions quoted by the brand aren’t accurate – to the point where I’ve had to get out a tape measure and check.

Look at a Qashqai parked on the road and I’m sure you’ll agree that it doesn’t look bigger than any other crossover, but that only tells half the story. The clever use of space on the inside means that I’m really starting to warm to the Nissan’s charms.

Every time the car is loaded up with my family, it never feels like we’re struggling for space. I have two young children – Hugo and Matilda – who use car seats, but there’s room to sit comfortably in the front without getting constantly kicked in the back. The generous amount of headroom also makes it feel like the whole cabin is light and airy, although that’s certainly helped by the very impressive full-length panoramic glass roof. It’s only available on Tekna models and above, but it’s definitely worth the money.

All this space is helped by lots of interior storage, with large door bins able to swallow water bottles, snacks and more, plus a split central storage area that easily takes a box of tissues, sanitiser and plenty of face masks.

It means all the clutter can be stored away without having to resort to the passenger footwell, like I’ve had to do in other cars.

Then there are the rear doors that open to 85 degrees – wider than any other car in this class. It may seem like a small detail, but it’s a huge help with two youngsters. Helping them in and out is so easy when the doors open that wide, because  you can lean in without bumping your head and safely strap them in without having to stretch.

Features like this make living with a Qashqai so easy. From the powered tailgate to the automatic central locking, it’s packed with lots of genuinely useful things.

When you do the nursery run on a daily basis, you really start to appreciate how effective the Qashqai’s use of space and tech is. However, I’ll admit that I struggled to fall in love with the car when it arrived; it never gets me excited when I’m behind the wheel.

I find the engine can be laboured at times and the CVT gearbox takes a lot of getting used to, especially at lower speeds, when it feels like the car is going to stall. However, the biggest problem for me is the ride quality; just driving around town can feel a little tiresome as it crashes over bumps and ruts in the road. The large wheels don’t help, but they are only part of the problem; the suspension doesn’t seem suited to cruising around town. There’s no doubt the Qashqai trails behind some rivals in this respect.

As I mentioned in my previous report, I’ve also been disappointed by the fuel economy. I’m now almost 10,000 miles into my time with the car, but I’m only just getting over 35mpg. For high-mileage drivers, I’m sure it’ll be a deal-breaker and the sooner Nissan offers a wider choice of powertrains the better.

But, the way it drives and the fuel economy are not why the Qashqai has become such a big seller in this country. It’s all about how practical it is, and that’s something that I have really come to appreciate. The new version is also more spacious than ever and that’s what really matters when you’ve got a family. 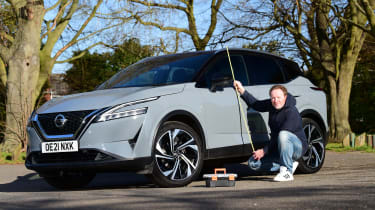 You may have seen the new Nissan Qashqai advert on TV. It features the new crossover in all its glory, with forked lightning flashing everywhere and the tagline “electrified with mild-hybrid power”. Impressive as the advert looks, in reality mild-hybrid systems provide minimal electrical assistance – not even enough to drive a car on electric power alone. So why is Nissan using it as a major selling point?

With no diesel options available, Nissan has staked everything on mild-hybrid tech. The Japanese brand believes it boosts the efficiency of the Qashqai’s solitary engine – a 1.3-litre turbo petrol in two states of tune – enough to appease those who would have previously gone down the diesel route.

However, I’ve been disappointed with the economy since taking delivery of the Auto Express Qashqai in mid-October. I’ve used it for commuting and a few long motorway trips, but I’ve only averaged 34.6mpg.

The poor economy has made me wonder why Nissan didn’t add other powertrains to the range when the new Qashqai first went on sale. I can understand why diesel is no longer available, but almost every maker is bringing out plug-in hybrid versions of their new models these days.

As such, Nissan’s clever “e-Power” tech will be a welcome addition when it arrives next year. It uses a 1.5-litre petrol engine to charge a lithium-ion battery, which powers the wheels. However, if you want a brand-new crossover capable of 40mpg-plus now, there isn’t a Qashqai to cater for your needs.

But maybe it isn’t all Nissan’s fault. I never got a chance to drive the Qashqai before the UK switched to E10 petrol, but a couple of colleagues have complained that filling up with E10 has hit their fuel economy figures to the tune of 4-5mpg. Still, even if I went down the route of filling up with premium unleaded, I think I would struggle to get above 40mpg.

Despite my fuel economy woes, I have otherwise been delighted with the Qashqai. My model is a top-spec Tekna+ 158PS Xtronic Auto and it’s packed with useful kit as standard. This includes a Bose sound system, a head-up display, heated seats, a heated steering wheel, a rear-view camera with a full around-view monitor, a powered tailgate and 20-inch alloy wheels.

It’s not just the kit that really impresses, because the car feels extremely well built, with lots of high-quality materials used throughout the interior. The electric leather seats are very comfortable, while the huge panoramic sunroof lets plenty of light into the cabin. Everybody who has sat inside has been surprised by how luxurious it feels.

Practicality is also one of the Qashqai’s strong points. There’s plenty of room for two child seats in the rear and I don’t have to move my seat forwards to avoid any unwanted kicks in the back. Plus the rear doors open to 85 degrees, so it’s easy for my two children to get in and out.

The boot provides a capacity of 504 litres, which is more than enough for my needs. Indeed, it comfortably swallowed everything for a recent family trip to Wales, including a travel cot, buggy and a couple of bags. The boot floor can also be lowered to give a little extra storage.

On the road the Qashqai performs almost like you would expect it to. It won’t win any awards for the way it drives, but most people buying one aren’t going to be throwing it around corners on a winding B-road. It’s a comfortable cruiser and the engine always seems to have enough power.

I’m not a fan of CVT gearboxes, but the Nissan’s is amazingly smooth in town. So smooth you often don’t even notice it, but as soon you come to a motorway and need to put your foot down, the revs rise rapidly and the acceleration takes a while to arrive.