The previous Kodiaq vRS wasn’t our favourite model in the range, because we felt it didn’t add enough to an already excellent SUV to justify the high price. The same applies here, except that the previous diesel engine was better suited to the car’s character – and was more economical, too.

This is the Skoda Kodiaq vRS. Much like the rest of the range, the performance flagship of the brand’s seven-seat SUV lineup received a host of subtle cosmetic upgrades inside and out for 2022, but the most significant change for this range-topper is found under the bonnet.

That’s because in a departure from the old twin-turbocharged 2.0-litre diesel, the latest vRS moves back to petrol power; a 2.0-litre, four-cylinder unit with 242bhp.

We’ll come onto what that’s done for the driving experience shortly, but the first impressions are defined by its new look. The changes aren’t too drastic, but the new front end, which gains a wider, more upright grille, looks more imposing than before. The new design is flanked by new, slimmer headlights which get Matrix LED technology.

Elsewhere, there’s not too much that’s changed. Most obvious are the new 20-inch alloy wheels that feature jazzy plastic ‘aero’ covers.

Inside, the handsome new steering wheel lifts the quality of an already finely finished SUV, while the optional panoramic sunroof fitted to our test car (a £1,230 extra) floods all three rows with light, really helping to lift the moody black and red theme. Up front, the seat backs are trimmed in alcantara, and the side bolsters hold you firmly in place.

Storage is as great as ever, with a dual glove box in the dash, big door bins and space for seven people. Or a huge 630-litre boot, if you fold the third row into the floor. If you do need to make use of all of the seats, the middle bench can slide forward so that, at a push, an adult can fit in the third row.

On to the engine, then. At first glance, the petrol’s 5bhp increase and a 0.4 second drop in 0-62mph time compared to the outgoing diesel might suggest that the vRS has taken a step forward. But more significant is the torque figure; at 370Nm, the new engine is a significant 130Nm down on what the vRS had before. 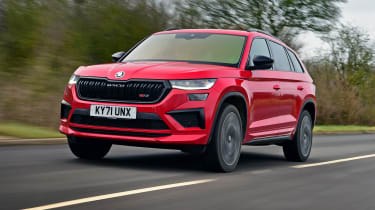 It’s silly to call any car that’s capable of a 6.6-second 0-62mph time ‘slow’, but what is clear is that the new model needs working much harder to ultimately make the same progress as before. It’s an engine that does its best work at higher revs; while that might be a likeable quality in a VW Golf GTI with which this engine is shared, in a large seven-seat SUV, it just seems a little inappropriate. The diesel was a better match.

And a more frugal one. Officially, the new model hits 31.7mpg, while the diesel option was at least 3.3mpg less thirsty based on the same WLTP tests. In the real world, you’ll be doing well if the number you’re getting starts with a three.

There’s an odd character to the engine, courtesy of an artificial soundtrack. Switch the car into Sport mode where it’s at its loudest, and the sound piped through the speakers transforms this four-cylinder into something that mimics the five-pot turbo that powers the Audi RS 3. It’s quite a love/hate feature; if you’re in the latter camp, at least it can be switched fully off in individual mode.

The gearbox can frustrate at times, too. It’s fine at inching along in traffic, and it’s also happy to engage in a full-bore acceleration run, but anything in between – say, pulling onto a roundabout where you’d like to get a move on without trying to use every horsepower available – causes a long, lazy pause followed by a jerky jolt into life. This isn’t unique to the vRS, however, but calibration quirks like this matter more on a car with a high performance slant.

But the confused nature of the vRS doesn’t quite end there, because the chassis setup isn’t that sporty anyway. Despite the bodykit and the large wheels, this is a soothing, relaxing car to drive; one which is much happier wafting along a motorway than tearing along a B-road.

That certainly isn’t a bad thing – in fact, it makes sense for a big family car to be comfy. The problem for the vRS is that the rest of the Kodiaq range rides even better, and costs much less cash, too.

This range topper costs just over £46,000. It offers plenty of standard equipment; as well as those wheels, there’s seven airbags, climate control, a 9.2-inch touchscreen, a 12.3-inch digital driver’s display, a parking camera and an electrically adjustable driver’s seat. The problem is, you can get all the practicality, most of the tech and similar looks in a Kodiaq Sportline trim, which starts from nine grand less – and most buyers won’t miss the extra performance of the vRS.

If you’re willing to do without the glitzy style and some equipment, the Kodiaq range starts from £31,480 – or £1,065 less if you can live without seven seats. At that price, it feels like a very compelling SUV option. The vRS, on the other hand, doesn’t.