The Enyaq iV vRS may signal the arrival of a new kind of fast Skoda altogether, but as it stands, it doesn’t quite have enough facets to its personality. It’s just too big, heavy and silent to really deliver involvement – and without that, you’re left with a slightly faster version of the new Enyaq Coupe, with a lengthy standard equipment list but a price tag to match. The vRS may be the fastest and most expensive Enyaq, then – but in our view, it’s not the best.

Skoda has been wrestling for some time with the thought of applying its vRS performance principles to the new world of all-electric motoring. The fact is that well-heeled customers who can afford a £40,000 EV are, if anything, more likely to have the extra cash to splash on a faster version of the same car. So here, with a slight whiff of inevitability, is the Enyaq Coupe iV vRS.

The model chosen to introduce all-electric vRS motoring is the new, sportier bodystyle of Skoda’s Enyaq SUV – identical in profile up to the B-pillar, but featuring a swoopy rear roofline that tapers noticeably down towards the tailgate. Rear headroom takes a hit, we’re told, but Skoda claims there’s still as much room for taller rear passengers as there is in an Octavia estate.

Should you prefer a more conventional SUV shape, the regular Enyaq is likely to get its own vRS variant by early in 2023. And if you want the sportier looks but are happy to forfeit performance to save some cash, there’s a SportLine version of the regular rear-drive Enyaq Coupe iV 80.

Underneath it all, of course, sits the VW Group’s MEB platform – and sure enough, the Enyaq Coupe iV vRS has plenty in common with VW’s own ID.4 GTX. There are two electric motors, one on each axle, producing a combined output of 295bhp and 460Nm. That’s enough to take this 2.2-tonne creation from 0-62mph in 6.5 seconds – not rocket-ship fast, but then, the initial push from 0-30mph is likely to be the equal of many sports cars. The top speed is 111mph – 12mph more than any other Enyaq – and you get lowered suspension all round (down by 15mm at the front, 10mm at the rear).

There’s a single battery capacity – 82kWh, of which 77kWh is usable, and that’s enough to give the new arrival a predicted range of up to 309 miles. It gets 135kW charging as standard, so you can take the battery from 10 to 80 per cent of its capacity in 36 minutes.

The first fully-electric vRS is also the most expensive car ever to carry a Skoda badge; it costs from £51,885 – more than the fully laden Founders Edition of the regular Enyaq and, yes, more than £3,000 up on the fastest hot ID.4. In truth, though, the Enyaq is priced to slot in between VW’s regular GTX and the better-equipped GTX Max.

Standard kit ought to be generous at these numbers, and it looks it. You get 20-inch alloys as standard (21s are an option), Skoda’s illuminated front grille, acoustic glass, Matrix LED headlights and, as on regular Enyaq Coupes, a 13-inch infotainment system along with a full-length panoramic glass roof. You can also, if you want, spec your vRS in the Hyper Green of our test vehicle – although you should probably be aware of how much paint will be involved before ticking that particular box as it’s certainly a bold hue. 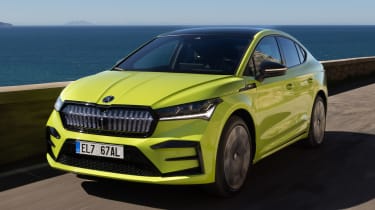 Inside, there’s room for four grown-ups, as promised, and the 570-litre boot delivers typical Skoda practicality. But the gap between the vRS and the rest of the range isn’t as wide as you might expect. There’s stitched suede on the top of the fascia, some carbonfibre-effect trim here and there, and more supportive seats, but the regular Enyaq is so neatly finished that its sportier cousin struggles to really stand apart from it. Even the glass roof doesn’t really transform the ambience; it’s so heavily tinted that it fails to properly bathe the cabin in light.

On the road, performance is brisk rather than rapid – much as it has been with many vRS models over the years, you could argue. Stamp on the throttle from rest and the instant torque of the electric motors will pin you back into the seat as the Enyaq heaves itself from 0-30mph. But this tails off before you get to 60mph, and once you’re up and running, the level of shove never reaches the sledgehammer forces delivered by a Porsche or a Tesla.

There’s a disconnect, too, between the Enyaq’s ability to gather speed and the lack of an engine note. Beyond the cheap thrill of those first few seconds, there’s nothing remotely involving in the experience of hard acceleration. You will, however, hear a bit of whine – more so than in rear-drive Enyaqs – as the front-mounted motor makes itself heard when it’s being pushed hard.

Our test car had the full gamut of options, including the Dynamic Chassis Control adaptive dampers, and 21-inch alloy wheels. We’ve been impressed, in the past, by how the edge has been subtly taken off the Enyaq’s fundamentally firm suspension set-up – and despite these add-ons and the lower ride height, the same basically applies here. Surprisingly happy over potholes and speed bumps, this is a far more comfortable car to drive around town than it ought to be.

But it’s a vRS, so it also has to deliver something special on quieter, more testing roads. And here the Enyaq Coupe falls short. It’s resistant to body roll, but it still requires a patient approach, particularly on poorer-quality roads. In the DCC’s Sport mode the firmed-up dampers have almost-comical rates of rebound, so the car picks up any changes of camber in the surface beneath it and throws the occupants around. Suffice it to say that it takes a lot to shift a person of your author’s bulk out of a bucket seat – but on some back roads of Tuscany, I found myself airborne several times.

Much like with the ID.4 GTX, it’s better to keep the system in its Normal setting, lean on the direct steering and put up with a slightly looser body control. Even then, though, the Enyaq isn’t really willing to play ball; there’s no fancy torque vectoring here, so while you’ll stay in your seat, mid-corner acceleration is ultimately governed by how much understeer you can tolerate, and how much speed you’re prepared to scrub off. We’ll be surprised if a rear-drive Ford Mustang Mach-E – which puts basically the same power through two fewer wheels – doesn’t prove a more rewarding proposition in a back-to-back test.

As with many EVs, the brake pedal modulation takes some getting used to. You’ll probably end up feeling a little frustrated by the initial progression as the system mixes regen with regular discs and pads.

Cruising refinement remains an impressive part of the vRS package here, at least. The greatest transference from the road to cabin is the rumble from the low-profile tyres, and the suspension – in Normal or Comfort mode – does a good job of isolating you from road scars. Again, though, these are not traits unique to this version; all Enyaqs, even those on standard suspension, possess this quality.