Given the incredible level of power, the 296 GTB is so easy to drive quickly but, importantly, so much fun, too. The clever chassis electronics give it an approachability that means you can make the most of the glorious powertrain, which sounds superb. Yet again Ferrari has put clear water between it and its rivals when it comes to the clever integration of mechanical and electrical – both in terms of the powertrain and the software that controls it. If this is how Ferrari will approach electrification in the future, there’s nothing to worry about at all.

Ferrari is entering a new era. Soon an SUV will join its line-up, and in 2025 we’ll see the first-ever Ferrari EV. But the brand isn’t turning its back on combustion-engined sports cars just yet, because its latest offering – the 296 GTB – has arrived, featuring some incredible technology. It packs an 819bhp punch in one of the most compact packages we’ve ever seen roll out of the gates of the Maranello factory.

While some firms focus on ‘mobility’, Ferrari feels that ‘driving’ shouldn’t be a dirty word, and its customers should have fun in their cars. So this is what the 296 has been developed to deliver, according to chief test driver, Raffaele di Simone.

At the car’s heart is an all-new 3.0-litre twin-turbo V6, the first V6 from Ferrari, the brand says (it doesn’t consider the Dino a Ferrari…) and the first with a ‘hot vee’ turbo configuration, helped significantly by a 120-degree angle between its cylinder banks. This set-up reduces the length of the intake and improves throttle response.

It’s joined by a 7.45kWh battery and an electric motor that delivers 165bhp and 315Nm of torque. This, too, improves response because its instant delivery can counter what little turbo lag there might be.

The power sources send that maximum 819bhp to the rear axle only through an eight-speed dual-clutch automatic gearbox – and losing a driven front axle compared with the SF90 Stradale plug-in hybrid is where the 296 GTB’s real complexity lies.

There are so many active systems and sensors monitoring and computing myriad parameters and values, and the technology is so powerful and capable that it all actually feels surprisingly natural.

The 0-62mph sprint takes 2.9 seconds, 0-124mph comes up in 7.3 seconds. But as eye-widening as these stats are, it’s not the numbers that grab you but how the GTB goes about delivering them, and how it makes you feel in the process. Turn the car on and with eDrive mode selected on the eManettino, it moves off silently. There’s enough performance to keep up with a warm hatch.

Cycle through to Hybrid mode and the car manages which power sources are needed intelligently. When the V6 does wake up, the integration of petrol and electric is so smooth, thanks to a clever new clutch between the engine and motor, that the switch is only perceptible audibly.

Performance mode is where things get interesting, with electric power rolled back slightly from its maximum potential to maintain battery efficiency, while stepping up to Qualify deploys everything the system has to give at the expense of charge.

However, in either of these two settings it’s surprising how quickly the battery does recharge to full once you back off. When at 100 per cent, the state-of-charge range stands at 16 miles, which seemed accurate to us. The top speed in eDrive is 83mph. 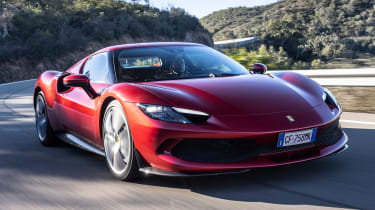 With the engine rotating, you get to sample one of the 296’s best elements: the sound. The crankshaft’s pins are also separated by 120 degrees, which gives a regular firing order and a note that genuinely apes a naturally aspirated Ferrari V12, so much so that di Simone called the engine ‘piccolo V12’, or small V12. It sounds glorious as it charges towards its 8,500rpm limiter, with the brand’s Hot Tube Resonator tech piping natural exhaust frequencies into the cabin for an authentic soundtrack.

Sound – and the quality of it – is just one of five elements that Ferrari has worked on to hit its targets when it comes to the ‘fun to drive factor’ that it has focused on so heavily.

The others are lateral and longitudinal performance (steering, handling and grip in corners, and acceleration respectively), the speed and smoothness of the gearshift, and braking performance and feel.

New electronic chassis systems take care of the first point. Ferrari’s Side Slip Control has evolved to incorporate a grip estimator function that senses how much torque is fed back through the steering to predict the level of adhesion available. There’s also a Six-Way Chassis Dynamic Sensor.

The result is a car that feels exploitable and predictable up to and over the limit; you can’t fail to emerge from a drive with anything less than a beaming grin. In Race mode on the regular manettino you can use the performance with such little fuss, the car managing and keeping things in check.

CT Off dials back the traction control but keeps an ESC safety net; the more the car senses you’re in control, the more it will let you play with the GTB’s plentiful balance.

Weighing 1,470kg without fluids, it’s quite light for a plug-in hybrid, and with a short 2,600mm wheelbase, it feels so agile. The light steering isn’t loaded with feedback, but it’s fast, scalpel-sharp, and offers a more consistent weight with a move to full EPAS compared with Ferrari’s old hydraulically assisted set-up. This inspires confidence.

Key to the front end’s ability to bite and cling to your chosen line is the rear end’s stability. You trust the back to stick and follow the front, while the traction it offers is genuinely impressive, given how much power the tyres are tasked with deploying. Bury the throttle in third gear and you’re compressed into the optional one-piece carbon-fibre bucket seat as the 296 howls forward. The DCT transmission rips through gearchanges with synaptic speed.

Maybe the only question mark in the car’s dynamic repertoire is at the very top of the brake pedal’s travel, where the response and regenerative effect could initially be a little strong for some. But it’s the most minuscule point that shows how polished a package the 296 GTB is dynamically.

A new ABS Evo function that allows you to brake later and harder into corners without losing performance or steering  control is bigger news and works brilliantly.

The updated infotainment and digital dash from the SF90 and Roma should be easier to live with, even if the interface is still a little clunky when performing some simple tasks. But in almost every sense the GTB is a triumph that shows Ferrari is pushing the boundaries of what’s possible from a sports car, which bodes well for its first EV.