The 4×4 360 adds performance to the DS 9 E-Tense line-up, but it also commands a serious price tag that puts it in the firing line of other impressive premium machinery, which might be hard to swallow for some. However, its dynamic ability seems sound, with strong enough performance and handling. We’ll wait to give a full judgement on the ride until we try this model’s bespoke chassis set-up on UK roads, but the car’s refinement is impressive. It may be a left-field choice, but the DS 9 definitely offers something different in this class.

As a brand with a successful all-electric racing team, having won the Formula E championship twice, DS is leaning on its expertise from the track and translating this to the road with its new DS 9 E-Tense 4×4 360 flagship.

Like the existing 225 hybrid, the long, elegant saloon has been equipped with an 11.9kWh battery, only here it feeds a pair of electric motors – one inside the eight-speed automatic gearbox that drives the front axle either independently or alongside the 1.6-litre turbocharged four-cylinder petrol engine, and one on the rear axle.

Despite this performance CO2 emissions of 41g/km and a claimed all-electric range of up to 38 miles mean a Benefit-in-Kind taxation rate for company car drivers of 14 per cent for the 2022-23 tax year. In fact, nine in 10 DS 9s sold are already plug-in hybrids, and the brand will drop its pure petrol model in the near future.

To balance the performance there’s an upgraded brake set-up featuring four-piston calipers clamping 380mm ventilated discs at the front, while the chassis has been bolstered with a wider track (by 24mm and 12mm at the front and rear respectively) and a lower ride height (15mm at the front and 5mm at the rear).

The calibration of the springs, dampers and roll bars are unique to the 4×4 360, while this range-topping model also features DS’s Active Scan suspension system as standard. This uses a camera to scan the road ahead, adjusting the dampers to suit for a softer ride and therefore more comfort when you hit a bump. “This is a GT, not a sports car, more of a GT feel”, DS 9 product manager Jean-Philippe Delaire tells us.

With that in mind, it’s a shame that the Active Scan system works inconsistently, sometimes seemingly missing imperfections in the road and therefore reacting slightly harshly to the occasional bump.

On smooth French roads and on big 20-inch wheels the ride is still acceptable, but as the surface breaks down so does the car’s composure, just a little. We’ve tried this system on cars in the UK before and found the tech lacking, so we’ll have to see if it fares any better in conjunction with the 360’s bespoke suspension set-up. 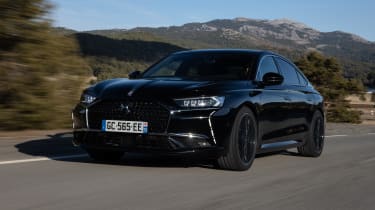 What’s not in question is refinement. With acoustic glass helping keep wind and road noise out, up to the car’s 87mph top speed in electric mode it’s very quiet. When the petrol engine kicks in this is subdued too, unless you really rev it.

Do so and the DS 9 feels fast enough, the instantly available electric assistance helping deliver a boost of torque from low speeds for easy performance, exactly what’s required from a premium machine majoring on luxury.

When the battery is depleted, the powertrain occasionally stutters as it struggles to manage the sources of propulsion, but on the whole the integration of the hybrid system is sound.

With Michelin Pilot Sport 4S tyres the steering is surprisingly precise and there’s a good level of grip to draw on; even if you’d not call the DS 9 a particularly engaging car to drive, the platform’s dynamic envelope has been widened with this new model.

Maximising what you can extract from it is helped by a new piece of tech called the DS Energy Coach app. This gives you a read-out of your brake regeneration and a score of how well you’re doing.

In reality, the real-time display is distracting, because you need to focus on the road ahead when you brake rather than looking down at the central 12-inch touchscreen where the info is displayed.

The infotainment is a known quantity, which means the graphics could be a little sharper and the system more responsive, but at least it comes packed with tech in top-spec Rivoli+ trim.

This includes built-in nav, Apple CarPlay and Android Auto integration, while heated, ventilated and massaging seats, wireless phone charging, an upgraded stereo, dual-zone climate control, full keyless go, a 360-degree camera with all- round parking sensors, lots of advanced safety tech and LED headlights are all standard too – and you’d expect so given the DS 9 E-Tense 4×4 360 Rivoli+ costs £57,200.

At this point the car is a little harder to justify given the opposition it’s facing, even if much of the leather-lined cabin complete with cool metal detailing feels high quality, if a little fussy in its design. It offers a good level of legroom in the rear (although it’s a little tighter tucking your feet under the seat in front) and average headroom.

But herein lies the DS 9’s appeal in some ways, that it is an alternative to the usual premium machines from the usual German brands. Vive la France.