The market for large hatchbacks and saloons is shrinking, but Citroen C5 X has enough about it to be a worthy contender on shopping lists. Private customers are likely to find this top-end hybrid’s list price a little rich, at £38,670 – or more than £500 per month on a finance deal. But user-choosers should see it as a well-equipped, comfortable big cruiser, with zero-emissions ability for daily commutes, that will cost a 40-per cent taxpayer just over £150 per month.

Citroen has overhauled the top of its range in recent years, removing the desperately unremarkable C5 and introducing the more competent and considerably more relevant C5 Aircross SUV. But the French brand can’t quite leave the idea of a ‘big model’ alone, so it’s introducing a new flagship – the C5 X.

It’s an intriguing halfway-house proposal, too, with a slightly elevated ride height, a rakish roofline, pronounced front and rear overhangs, pseudo-SUV cladding around the wheel arches and a fastback-style hatchback instead of a regular boot. But make no mistake: Citroen thinks this car can offer a modern reinterpretation of the classic wafting models of old. Indeed, the X in the name is as much a reference to the old CX and XM as it is a reflection of the crossover body style.

It’s a big car, too, with an overall length of just over 4.8 metres and a wheelbase of 2,785mm; there simply aren’t many mainstream saloons or hatchbacks of that size these days, although it’s probably worth noting that the Skoda Superb – one of few obvious rivals for the C5 X – is a little longer on both those measurements. Nevertheless, Citroen’s effort has been well received so far in China, where it’s manufactured.

The C5 X is being offered with a choice of three powertrains – two petrols and a plug-in hybrid. The regular motors are the well-proven 1.2-litre three-cylinder PureTech producing 128bhp and 230Nm of torque, and a four-cylinder 1.6-litre unit with 178bhp and 250Nm.

The plug-in hybrid driven here, meanwhile, is stock Stellantis fare as well: the same 1.6-litre PureTech mixed with a 109bhp electric motor for a combined peak output of 222bhp. The battery capacity is 12.4kWh, enough for up to 34 miles of pure-electric motoring after less than two hours connected to a 7kW home wallbox. Citroen sees this as a potentially popular choice for company car users, thanks to CO2 emissions of 30g/km and a Benefit-in-Kind tax band (f0r 2022-2023) of 12 per cent.

Despite the jacked-up looks, all versions of the car are front-wheel drive, and there’s a single eight-speed automatic transmission offered across the range. And that Chinese manufacturing base means there’s no diesel option.

Underneath it all, of course, is Stellantis’s EMP2 platform – but the C5 X does feature Citroen’s most comprehensive attempt yet to offer standout comfort in the class. The firm’s Progressive Hydraulic Cushions – in effect, hydraulic bump stops – are now joined by the Active Suspension technology that was first seen on the DS 7 Crossback. It uses sensors to read the road surface, allowing software to then adjust the hydraulic dampers themselves. Perhaps to help counter the extra weight involved, the Active tech is a standard feature on the plug-in hybrid version of the car.

Citroen is keeping the proposition relatively simple, with just six body colours and five two-tone combinations, and a modest line-up of three trim levels with relatively few options. The range starts with Sense Plus, which brings 19-inch alloy wheels, LED headlights, front and rear parking sensors with a reversing camera, and a 10-inch touchscreen infotainment system that includes navigation and hook-ups for Android and Apple. This spec is available on the lower-powered petrol and the hybrid.

Shine is offered with all three powertrains; it increases the infotainment display size to 12 inches and adds a heated steering wheel, plusher upholstery, chrome exterior trim, a head-up display and LED ambient lighting in the cabin. It also gets a different design of diamond-cut alloy wheels.

Climb aboard the C5 X and you’re likely to notice the slightly elevated floor first, and then how close your backside can get to it. From the outset, this feels unmistakably saloon-like – a world away from an elevated SUV. Consider it the mildest of crossovers, therefore, but it’s a spacious cabin overall, with room for four six-footers to travel in comfort. Even the rear headroom’s not bad, and that on a test car with the optional panoramic sunroof. 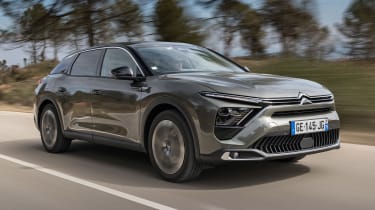 The cabin itself has a pleasing mix of materials – a rubberised padding on the dashboard, some textured plastics with colour to brighten up what would otherwise be slabs of dark grey. It’s a pity to see Stellantis’s love affair with piano-black finish continuing here, though; in our experience, it’s a trick that looks smart under showroom lights, only to highlight every particle of dust and scratch easily in everyday use.

Our first C5 X drive was in the French equivalent of top-spec Shine Plus. Stellantis’s PHEV set-up is pretty familiar by now, with recent appearances in the latest Peugeot 308 and Vauxhall Astra, to name but two. But it’s a decent system regardless, with a smooth gearbox and pretty seamless transitions between electric and combustion power.

There’s not much motor whine to speak of as you travel around town in EV mode, and the petrol engine only makes itself heard if you really stamp on the throttle and demand maximum acceleration. Even then, its unremarkable four-cylinder tone never becomes truly thrashy.

The C5 X continues its refined performance once you’re out of town and up to a decent cruising speed. There’s some wind noise from around the A-pillars at 70mph (even with our range-topper’s acoustic glass), but road noise from the pleasingly high-profile tyres and 19-inch wheels is well contained, and the powertrain sits nicely in the background as it flicks between petrol power and electricity.

The chassis is likely to split opinion – but in many ways, it’s the most convincing execution of Citroen’s Advanced Comfort to date. The system does like to take a second stab at reacting to most undulations, but it does this in such a subtle, gentle fashion that you can’t help but feel you’re being wafted along. The set-up is soft – almost certainly softer than any of the C5 X’s rivals – but it manages to escape losing complete control of itself.

There are a few compromises in body movement – you’ll notice pitch if you stamp on the throttle or brakes, and the car tends to nod a little over speed bumps and the like – but the overall effect is a solid ability to dial out the majority of road imperfections. With the hybrid powertrain subtly flicking between low revs and pure-electric power, and the suspension gently floating you over road scars, the C5 X is extremely competent at eating up motorway miles.

The Achilles heel remains sharp, sudden jolts – like the sort you get from bridge expansion joints – which push the EMP2 chassis beyond the limits of its dampers and even the fancy bump stops, and are still transmitted through to the cabin as a result.

The C5 X is far from completely undone by twisty roads. The steering is perhaps a little light, and it’s totally devoid of any feel, but there’s a directness that’s matched by surprisingly decent resistance to body roll in corners. It’s at this point, perhaps, where you take most satisfaction from choosing this car over a taller SUV – although any attempts to really hurl the Citroen at a corner will ultimately just result in understeer instead of genuine involvement. You really have to throw rapid changes in direction at the chassis for it to reach the point where it’s struggling to get out of its own way.

The boot, meanwhile, shows why Citroen is hoping this car can attract customers from larger saloons like the Superb, as well as those moving across from SUVs. The regular petrol models have 545 litres of capacity, rising to 1,640 litres if you lower the rear seats. Hybrid versions like the one driven here take a 60-litre hit on these numbers, thanks to the higher boot floor, but at least there’s no discernible lip to load heavy items over.

Either way, it’s a useful square space, and access is improved by a load cover that moves up with the hatchback so you don’t need to move it out of the way yourself. There are relatively few bag hooks, though, and should you use the handles in the side of the boot to lower the rear seats, there’s a sizeable step up in the floor. The overall capacities can’t match those of Skoda’s Superb, either.

We didn’t get a chance to try Citroen’s smartphone app on our test but from earlier experience we know that it should offer decent integration with the PHEV’s electrical systems. You’ll be able to check charge levels, schedule charging and precondition the vehicle to warm it up or cool it down prior to your journey.

The onboard infotainment, meanwhile, has a slick interface and a pretty quick processor. But as with most OEM systems, we’d swiftly bypass the built-in TomTom navigation and use the Android or Apple maps instead.