While the e-C4 grabs headlines, this new petrol unit shows there’s lots of appeal in the ICE options, too. The power boost makes the C4 a lively option that gives a little flexibility to those looking for a comfortable family hatchback. It’s just a shame that one or two negatives take the shine off the overall package.

The Citroen C4 has a unique standing in the family hatchback class, and we’re not talking about those striking looks. It’s what’s under the bonnet that really sets it apart from rivals like the Ford Focus and Volkswagen Golf, because it’s available with petrol, diesel and fully electric powertrains. And now there’s a new range-topping petrol model with the most firepower of the bunch.

Called PureTech 155, it’s a variation of the 1.2-litre three-cylinder unit already used in the C4, producing 153bhp here. There’s 10Nm more torque, too, while the PureTech 155 is eight-speed auto only.

It’s a significant addition to the range, not least because Citroen now has an engine to take on the VW Group’s 148bhp 1.5 TSI unit found in the Golf and the Skoda Octavia.

Citroen’s new engine is familiar. Prod the dash-mounted starter button and it wakes into a very quiet – if vibrating – idle, while on the move, the automatic transmission  shuffles through the ratios sweetly.

It has a little more enthusiasm than the PT 130 motor. Squeeze the throttle while cruising in a high gear, and after a brief pause before the turbo spools up, there’s a more muscular feel from low down, yet it feels more lively the higher the revs build.

The suspension set-up remains the same as in other combustion C4 models, which means it’s very soft by the standards of the class. In general, this is great; the C4 soaks up bumps well, and does a pretty good job of isolating the crashing noises of harsher jolts and potholes, too. Road rumble is also fairly well suppressed, even if a little wind noise disturbs the peace at speed. 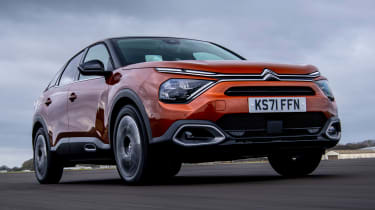 However, the one downside of that soft suspension is exaggerated by the new engine’s extra shove. Accelerate hard – made easier by switching to Sport mode, which noticeably sharpens the throttle – and the C4’s nose pitches up.

Just like before, there’s also quite pronounced dive under braking and plenty of body roll through the corners, which encourages you to settle into the comfortable seat and employ a rather more relaxed driving style.

Saying that, there are a few irritants that might leave you a little more tense then you’d like. The steering, for instance, is very light and quite vague, and the infotainment system is a little fiddly; much of the 10-inch infotainment screen is occupied by time and temperature information.

But what frustrates most of all about the Citroen C4 is a result of some pretty fundamental calibration flaws concerning the relationship between gearbox and brakes. The former practically stalls the engine before cutting the torque from the wheels, and the latter bite inconsistently, often sharply when manoeuvring. Factor in an over-zealous start/stop system and it means that bringing the car to a smooth halt is tricky. The soft suspension set-up here only amplifies the sensation.

It’s a shame, because there’s plenty to like. Although the cabin isn’t quite as spacious as an Octavia’s, the back seats rank above the class average for kneeroom, plus our car averaged around 45mpg; and that’s not the only way that the C4 will help offer value, because standard kit is generous.

The PureTech 155 is only available in the C4’s top-of-the-range Shine Plus trim. LED headlights, a digital dashboard and leather seats are all fitted as standard.

Weigh up the finance payments, and beside its rivals the C4 makes reasonable sense. Place a £3,000 deposit on a three-year PCP agreement with a 10,000-mile annual limit, and the PureTech 155 comes to just under £420 per month, a figure helped by Citroen’s current £950 discount across the C4 range. On matching terms, the Volkswagen Golf 1.5 TSI DSG automatic in Style trim comes to £422 per month.

If anything, it’s the other models in the C4 range that makes it a little harder to justify. The PureTech 130 in Shine Plus trim is £23 per month cheaper, and when that engine is paired with the mid-spec Sense Plus specification we’d recommend, it only costs £352 per month. You might lose that degree of oomph as well as some of the poshest equipment add-ons, but that’s still quite a significant saving.