The BMW X2 xDrive25e feels instantly dated in an age of cutting-edge, pure electric SUVs – but not because of its powertrain. It’s too impractical, too uncomfortable and, ultimately, too expensive. Its cabin and technology can’t match offerings from rival German brands, either; the Mercedes GLA 250 e is a superior plug-in family SUV.

For those not yet ready to make the switch to full-electric, plug-in hybrids (PHEVs) make for great company cars. Not only can you save a packet on fuel costs, but swapping out of a diesel could slash your Benefit in Kind (BiK) tax bill.

Take the BMW X2, for example. The xDrive25e plug-in hybrid we’re testing here emits just 40g/km of CO2 according to official tests, compared with 149g/km for the xDrive20d diesel. The difference could be as much as £3,600 per year in BiK alone.

Plug it in and BMW claims you’ll get 32 miles before you need to make use of the petrol engine. In reality, we were seeing more like 23-25 miles – but that’s still enough for most to go about their daily duties, or their commute to and from work. This kind of distance is about par for the class, although Mercedes claims closer to 40 miles for the GLA 250 e – despite its similarly sized battery.

Thing is, the Mercedes GLA is a much newer car, and feels it the moment you sit inside. The X2, with its narrow screen perched high on the dash, half-baked digital instrument cluster and bulky, old-fashioned gear lever isn’t a patch on the sleek Mercedes. Quality is generally very good in both cars, but the GLA nicks it on appearance and desirability.

Things don’t improve in the rear of the BMW either. Sure, the X2 is designed as the X1’s sleeker, sportier sibling, but space in the back is compromised regardless. Headroom is especially poor – though admittedly this isn’t an issue exclusive to the PHEV. 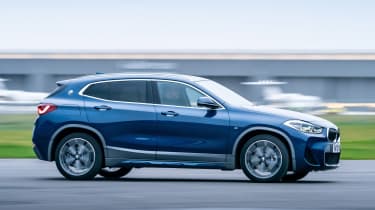 The boot is an acceptable size at 410 litres – 25 litres larger than the GLA’s – and there’s storage under the BMW’s boot floor for the charging cables. The Merc has the edge with the seats down, however, largely thanks to its boxier shape.

Running on electric power, the X2 xDrive25e is as quiet as you’d expect a plug-in hybrid to be. That said, the faster you go, the more noticeable the road noise is – although we’d expect this to be better on smaller wheels; the 19-inch rims and runflat tyres on our car didn’t offer the quietest driving experience.

Nor the most comfortable. There’s a quite pronounced tendency to jump about on rougher roads and the ride never truly settles. Furthermore, the steering is lighter than you might expect of a BMW, and while it’s precise enough, there isn’t much feel. Body control is a strong point – the X2 has always been among the sharpest cars in this class to drive.

It’s quick too; BMW claims 0-62mph in 6.8 seconds and despite a relatively small three-cylinder 1.5-litre turbocharged petrol engine, the electric motor and standard-fit all-wheel drive allows the X2 a decent turn of pace. The gearbox is a six-speed rather than the newer eight-speed autos found in a number of modern BMWs, but it shifts smoothly and is slick enough when you want it to be.

Of course, to make the most of the potential cost savings, you’ll need to plug the X2 in as often as possible. Doing so via a 7kW home charger takes around three hours – meaning it’s easily achievable overnight on a three-pin plug. Depending on your electricity tariff, filling the 10kWh battery could cost less than £2.

But beware, recent list price hikes mean that even the entry-level X2 xDrive25e Sport costs more than £40,000, so private buyers will pay a road tax premium for the first five years. M Sport cars such as ours cost just over £3,000 more, but bring bigger wheels, and bespoke trim to the standard model’s climate control, sports seats, electric tailgate and sat-nav. Apple CarPlay is standard, but the X2 still doesn’t come with Android Auto.