At a time when buyers of small coupes are starved of choice, the new 2 Series doesn’t just uphold the sharp handling repudiation of its spiritual forebears, but it gives keen drivers an obvious choice. The entry-level 220i wouldn’t be our pick for driver thrills, but as an overall package it delivers a strong blend of performance, engagement and usability.

BMW’s back catalogue is littered with a line of illustrious compact two-doors, and this all-new 2 Series Coupe is aiming to be the latest addition to that group. It follows on from icons like the 2002 Turbo, E30 M3, 1M Coupe, and even its predecessor that spawned the M2 CS – so will this version eventually earn a similar status among the BMW greats?

There is a performance-focused M240i model, which we’ve already driven abroad, and it’ll spawn a new M2. However, this 220i is the more affordable model. Even then, rivals are thin on the ground, so commercially it stands a fairly strong chance of success. The Audi TT is one competitor, though it’s now been around for some time. Then there’s the Toyota GR 86; due in May, this will give the models like the 220i a run for its money dynamically.

The new 2 Series is unrelated to the new, front-wheel drive 2 Series Active Tourer MPV, or the 2 Series Gran Coupe; BMW’s engineers know that rear-wheel drive is a necessity to uphold the engaging drive fans demand. That’s why the Coupe uses the same CLAR underpinnings as the larger 4 Series.

The outside looks fresh and modern, yet has some very clear links to previous BMW two-doors. The headlights, with a single round internal unit, are inspired by the 2002, while the rear box arches are a nod to the original M3. It certainly has presence for something relatively compact, though it has grown 105mm longer and 68mm wider than the car it replaces, while the roof height is 28mm lower.

Its close relationship to the 4 Series is immediately apparent when you step inside. The dashboard layout is near-identical; the same driver-focussed arrangement that’s subtly angled towards the driver, the same combination of 12.3-inch digital driver’s display and 10.25-inch touchscreen, the same strong build quality. The door trims, which get a wraparound grab handle surrounding a subtly backlit panel, are unique to the 2 Series, though.

Nudge a little lever on the seat backrest, and a motor slowly rolls the seat forward to provide access to the two back seats. Anyone over average height will have to slouch or else headbutt the ceiling, but the seats are much more useful than those in the Audi TT. There’s also a very useful 390-litre boot – 20 litres more than the old 2 Series.

From launch, there’s one diesel engine and two petrols to choose from. The former, the 220d, promises 60.1mpg and a hefty 400Nm of torque from its 2.0-litre mild-hybrid unit, while the range is topped by the M240i: a three-litre, in-line six-cylinder that offers 369bhp and four-wheel drive to sprint from 0-62mph in just 4.3 seconds. That’s the same as the previous-generation M2 when it first came out. 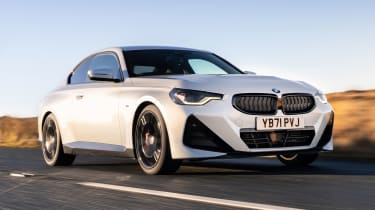 Here, we’re driving the entry-level 220i. The 181bhp 2.0-litre unit is shared with the 3 and 4 Series among others, but here it gets a new cylinder head with an integrated exhaust manifold that helps to curb emissions while keeping the same power and torque figures.

It’s expected to be the most popular model in the range by some margin, accounting for 60 per cent of sales. So what will those buyers be getting themselves into? Well, while a 0-62mph time of 7.5 seconds seems lively on paper, the way it delivers that number isn’t the most thrilling. The power delivery is very linear, which means you neither get the big mid-range shove common with many turbocharged units, nor do you get much incentive to rev the car out to its red line. On the plus side, it’s exceptionally refined at a cruise, and the eight-speed gearbox – standard throughout the range – is excellent.

The 4 Series architecture is a pretty solid place to start from a ride and handling point of view. It’s no surprise to discover that, with a wheelbase 110mm shorter, and at 1,565kg, the 2 Series feels sharp and engaging to drive.

There’s aluminium suspension components at the front, plus the bonnet and front wings are made from the same lightweight material, all helping trim weight from the car’s nose and achieve a balanced weight distribution. The result is that you feel like the centre of mass is in the middle of the car, that the nose tips into a corner instantly and with very little resistance.

It’s not quite perfect. We’d like some more feedback from the steering, and the response of the variable rack ramps up quite dramatically as the lock increases, so it requires quite precise inputs. Despite the sharpness, the ride isn’t at all harsh. Yes, it’s firm, but it rounds off the worst bumps effectively, and mid-corner undulations are dealt with easily.

Another benefit of the car’s new platform is the advanced tech that’s been developed for it. This ranges from driver assistance systems, including adaptive cruise that can bring the car to a halt in traffic and move off again when it clears and, for the first time in the 2 series, a colour head-up display.

Prices for the new 2 Series start from £34,980 for the 220i M Sport – a useful five and a half grand cheaper than the 420i Coupe. This is still pricey for an entry-level compact model, but then we’ve already seen even the more basic 2 Series Coupe is packed with talent.