An avant-garde Alpine two-seater sports car design study has been teased for the first time, ahead of the concept’s official unveiling later this month.

Called the Alpine A4810, this concept isn’t a 100% in-house Alpine creation – instead, the design work has been carried out by transport design students at the European Institute of Design (IED) as part of a thesis project. However, Alpine is listed as an official collaborator, which suggests the firm’s backing of the one-off concept could highlight Apline’s interest in the tech and the model’s design direction.

Despite the gloomy teaser image, it’s clear to see the concept is a low-slung sports car with prominent wheel arches and a mid-engine-style layout. The car also sports a wide front light strip and four slim headlights – the latter being a clear nod to other Alpine cars, such as the classic original and retro modern versions of the A110 sports car.

No proposed technical info has been revealed, with the only definitive detail confirmed so far being its hydrogen powertrain, which “represents the extreme sportiness from the future”. 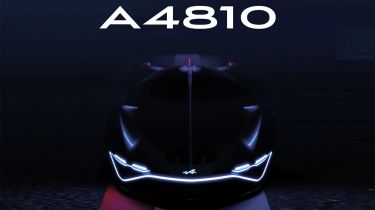 This hydrogen connection could indicate the sports car is some sort of racing machine; the concept’s A4810 moniker isn’t too far removed from the name of Alpine’s A480 Le Mans challenger, and the Le Mans race organisers want to introduce a new hydrogen car category at the iconic endurance event by 2024.

Full details on the IED’s Alpine A4810 hydrogen performance car project will be disclosed on 18th March, when the show car will be presented in full for the first time in Turin.

While it remains to be seen how much influence the A4810 project will have on future projects, Alpine is forging ahead with new road and racing car developments of its own. Three new electric-only Alpine cars will arrive by 2026: an Alpine R5 hot hatch, a GT X-Over coupe-SUV and a next-generation sports car – and Alpine is set to replace its current A480 racing prototype in 2024 with a new design to take on other ‘Le Mans Hypercars’ from Toyota, Peugeot and Ferrari.

Check out the latest Alpine news and reviews here…