A refreshed version of the Lamborghini Urus has been spotted undergoing cold-weather testing in the Arctic Circle ahead of its launch later in 2022.

While the updated Urus seen testing at the Nurburgring last year wore heavy camouflage, this prototype is virtually undisguised, giving a much clearer look at Lamborghini’s styling revisions.

The Aston Martin DBX rival has gained a new front bumper containing several moderate revisions. The fork-shaped intakes are gone, and Lamborghini has switched the old egg-crate radiator grille for a simpler design. The outer air ducts have been reworked too, forming a pair of triangles that point inwards.

Below, there’s a fresh splitter, and above, a pair of new bonnet vents can be seen. At the other end of the car, there’s another new bumper that features vents behind the rear wheel arches. 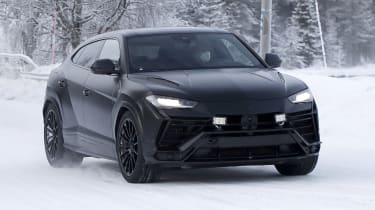 We’re yet to see the updated SUV’s interior, but we expect it’ll get some retrimmed seats, a tweaked sports steering wheel and an updated infotainment system. All of the upgrades should also bring an increase over the current car’s £160,000 starting price.

When the Urus was unveiled back in 2017, Lamborghini hinted that a plug-in hybrid version was in the pipeline. The car’s mid-cycle refresh would be the ideal time to introduce the new powertrain, but according to Lamborghini’s new electrification plan, the brand’s first plug-in hybrid vehicle won’t arrive until 2023, so it’s likely to come a little after the mid-life update.

As the Urus shares its platform with the Porsche Cayenne, Lamborghini would likely take on the twin-turbocharged 4.0-litre V8 unit used by the Cayenne Turbo S E-Hybrid. That system would give the Urus a supercar-baiting 671bhp and 900Nm of torque, while dropping its CO2 emissions to around 90g/km.

The current car’s 650bhp twin-turbocharged 4.0-litre V8 will live on – although it remains to be seen whether Lamborghini’s engineers will tap even more performance from the unit, in the same way they did with the facelifted Huracan supercar.