The MG5 is a no-nonsense family estate that offers decent practicality with the efficiency benefits of all-electric drive. It won’t suit buyers looking for any sparkle and shine on their driveway, as the MG5 lacks any pretension or showy, extravagant character.

Instead, it delivers on what matters most: plenty of space, good levels of standard equipment, a usable range and low running costs. The MG5 isn’t going to set your pulse racing, but if you can get past the humdrum image you’ll find a car that just gets the job done – at a price that makes it hard to resist.

Electric cars are often criticized for being too expensive to buy. With stylish city runabouts such as the Fiat 500 and MINI Electric priced at well over £20,000, and the Honda e now in excess of £30,000, buyers with an eye on practicality and value for money might be put off making the switch to a new EV

Enter the all-electric MG5. With its functional estate bodystyle, impressive kit list and a starting price of around £28,000 (after the PiCG government grant), it brings a no-frills approach to challenge the latest models in the burgeoning electric car market.

Evergreen electric rivals such as the Nissan Leaf and Renault Zoe can’t compete on price, and don’t come close on interior space, while the MG5’s significantly lower running costs could persuade buyers away from the more typical options of the Ford Focus estate and Volkswagen Golf estate.

At launch, the MG5 featured a 52.5kWh battery, giving a claimed range of 214 miles, with a single 154bhp motor driving the front wheels. With 50kW on-board charging capability, it’ll take just 50 minutes to charge the battery from 0-80 per cent, while topping up (to 100%) from a 7kW home charger requires around 8.5 hours.

MG no longer offers the 52.5kWh battery model on the price list. Instead you’ll find an upgraded MG5 Long Range version with a larger 61.1kWh battery. The revised model will take you up to 250 miles on a single charge, although the 0-80 percent recharge time naturally takes a small hit, rising to 61 minutes using a 50kW charger. However, the MG5 is now also compatible with 100kW charging, so times could drop to around 40 minutes if you have access to a suitably-equipped charge point.

There are just two trim specifications available for the MG5: Excite and Exclusive. The former includes enough kit for most, with manual air con, sat-nav, Apple CarPlay and Android Auto connectivity, a DAB radio and Bluetooth, while the latter adds luxuries such as heated seats, leather upholstery, automatic climate control, keyless go and extra USB ports.

As with most electric cars that have a single motor, the MG5 uses a single-speed fixed gear to send drive to the front wheels. The car’s soft suspension set-up doesn’t translate into a flawlessly smooth ride however, with the typical pockmarked roads around town too easily felt through the cabin. Things improve when on the motorway, although the doughy steering could be better, with inputs not feeling particularly precise.

The MG5 probably won’t suit keener drivers as, despite a decent turn of straight line speed, the estate’s dynamic deficiencies are again highlighted with lots of body roll through corners. There are three levels of brake recuperation on offer, but none are effective enough to allow ‘one pedal’ driving – a function which helps easier driving in stop/start town traffic.

Three individual drive modes are also available: Eco prioritises range, still allowing for a decent turn of speed, but taking a little longer to get up to motorway pace. In Normal you benefit from full power, while Sport mode adjusts the throttle response to unlock a slightly unexpected level of performance – although the trade-off is you’ll drain battery power more quickly.

With 154bhp and 260Nm of torque, the front-wheel-drive MG5 is able to dispatch the 0-62mph benchmark in 7.3 seconds, but probably more relevant to buyers in terms of real-world driving will be the sprightly 0-30mph time of 3.2 seconds. In comparison, the 181bhp MINI Electric posts a time of 3.9 seconds from 0-37mph, so the MG5 can definitely hold its own if you need to get off the line quickly.

The MG5 will be attractive to business users due to its claimed 250-mile maximum range, and zero CO2 emissions attracting the lowest possible Benefit-in-Kind rate: 2 per cent for 2022/23. Competitive list prices, starting from around £28,000, will appeal to private buyers, while some determined haggling should secure a decent discount.

On-board charging capability of 100kW means that you should be able to top-up from 0-80 per cent in around 41 minutes with either battery. MG claims an efficiency rate of 3.5 miles per kWh for the 5 EV, which is the same as the MINI Electric, and just behind the Honda e at 3.8m/kWh. In our tests of the Long Range model we recorded 3.7 miles per kWh.

Both MG5 versions sit in group 32 for insurance, so premiums will be a little more expensive than a typical combustion-engined estate. For example, the Ford Focus range is rated from group 10 to 23, with only the standalone 276bhp ST version in a higher group 34. The MINI Electric ranges from group 22-23, while the Honda e is in group 25-29.

Data suggests that, after a typical three-year/36,000-mile ownership period, the MG5 will hold onto around 50 per cent of its original list price, which is just ahead of its ZS EV sibling at an average of 48 per cent. The MINI Electric retains around 55 per cent of its value over the same period.

MG has been owned by Chinese manufacturer SAIC since 2007, and the 5 EV is a rebranded version of the company’s Roewe Ei5 model. Over the past few years, SUVs have been steadily taking sales away from more traditional estate models, but the MG 5 represents an affordable, back-to-basics approach to family motoring – made all the more appealing by the adoption of emissions-free, all-electric drive. 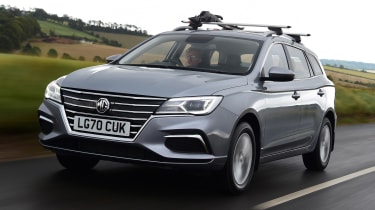 At first glance, the dull styling of the MG5 won’t perhaps seem as desirable as its more modern ZS EV stablemate, but it will attract  buyers looking for decent range and value for money. Yes, most of the exposed plastic materials in the cabin are hard to the touch and rather cheap looking, but the 5 EV isn’t overly utilitarian and a sprinkling of chrome and piano black trim helps to soften things up.

Arctic White paint is offered at no extra cost, although you’ll have to pay an additional £545 for one of the blue, black or silver metallic hues. The special tri-coat Dynamic Red paint colour is £695.

Given the no-nonsense nature of the MG5 in so many areas, first impressions of the infotainment set-up seem to buck the budget-focused trends of the rest of the car. Thanks to a large eight-inch display, which has bright, colourful graphics and a sharp resolution, it looks contemporary enough.

Delve a little further into the system and there are some smalls signs of weakness, though. The process of entering a destination (via a small and fiddly on-screen keyboard) and waiting for the route to load took 30 seconds; that’s five seconds slower than the a Volkswagen ID.3, which is hardly the quickest system itself.

There is compatibility with both Android Auto and Apple CarPlay, though, both of which we’d recommend instead of the built-in system. It’s just a shame that there’s no space to store a smartphone beside the USB port, and the analogue dials don’t look particularly inspiring.

The MG5 offers more practicality and flexibility than other similarly-priced EVs. Generous space upfront helps the driver and front passenger get comfortable, while the flat floor provides a bit more room in the rear.

With its decent 250-mile maximum range (rated on the WLTP combined cycle), the MG5 Long Range is able to take on longer journeys out of town without provoking any anxiety about where you might be able to stop and top the battery up. Generous standard kit adds to the appeal, with cruise control, sat-nav and a 7-inch digital driver information display making trips a little easier to manage.

Extra luxuries such as leather upholstery and heated front seats are available with the more expensive Exclusive trim, while the driver benefits from six-way electric seat adjustment, an auto dimming rear view mirror and auto wipers.

With its five-door estate bodystyle, the MG5 offers plenty of room for rear occupants, although you’ll find even more space to stretch out in the bigger Focus. Headroom is fine and taller passengers should be able to sit comfortably behind the front two.

The MG5’s 464-litre boot should be big enough for most family needs, but there is quite a big lip to negotiate, so loading/unloading bigger items is more awkward than it should be. The rear seats split in a 60:40 configuration, and when folded provide 1,456 litres of room for your luggage.

Overall space eclipses pretty much any other EV in this price range, but if you’re after class-leading capacity then you should look towards the Skoda Octavia estate with its 600 litre boot.

The MG5 hasn’t yet been crash tested by Euro NCAP, but buyers can be reassured by the full five-star rating achieved by its MG ZS EV sibling. All MG5 Long Range versions are now fitted with the MG Pilot driver assistance package, which includes lane-keeping, adaptive cruise control and traffic jam assistance. They also all feature front, side and curtain airbags, Emergency Brake Assist, ARP (Anti Rolling Protection) and Hill Launch Assist, along with a rear parking camera and an electric parking brake with auto-hold function.

It’s still too early to assess the MG5’s reliability, although early signs appear positive. MG will be disappointed with its performance in our Driver Power customer satisfaction survey, however. The manufacturer finished in 29th (and last) place in the Best brands poll, while only the ZS model featured in the list of Best cars to own – in 41st position out of 75 cars. MG will be hoping the all-electric talents of the MG 5 and MG ZS EV will push them further up the list in 2022.

A strong seven-year/80,000-mile warranty is offered with all MG cars. This outshines most other manufacturers, with Ford offering just three years/60,000 miles cover for the Focus and MINI providing the same duration, but with unlimited mileage for the Electric model.

MG offers a range of service plans to allow you to spread the cost of scheduled maintenance, rather than having to pay in a one-off lump sum.

If you’re looking to buy an MG5 EV, then why not visit our sister site buyacar.co.uk for the latest deals…