Lexus has refined its best-selling NX SUV in all the right areas, which means it’s more efficient, comfortable and features a new infotainment system that’s worthy of its premium status. Build quality is superb, too, while practicality is up to par with good passenger space and a decent boot.

You might find the NX a little expensive at the top end of the range, and the CVT automatic gearbox still isn’t the smoothest, but the Japanese SUV is a convincing proposition and ready to take on rivals from Audi, BMW and Mercedes.

The Lexus NX is the Japanese manufacturer’s best-selling model in the UK, where it’s sharp, angular exterior style and luxurious, well appointed cabin help it stand out from its more traditional German rivals. At first glance, you may think not an awful lot has changed with the second-generation NX; there’s been a little nip and tuck for the front light clusters, while a light bar now runs the width of the rear, but it’s still unmistakably an NX – albeit a slightly bigger version, overall, than the previous model.

It’s inside the cabin and under the bonnet of the NX where Lexus has focused much of its attention. The previous model struggled to deliver on its claimed economy figures during real-world driving conditions, and didn’t have an answer to the efficient diesel-engined SUVs of the time.

With oil-burners on the wane and electrified powertrains becoming the norm, Lexus has embraced plug-in hybrid technology for the first time with the introduction of the NX 450h+ model, while a 350h self-charging hybrid version is also available. Based on the same underpinnings as the Toyota RAV4, the NX uses a 2.5-litre, four-cylinder petrol engine, paired with a CVT automatic transmission, with the 302bhp PHEV model including a 18.1kWh battery and a pair of electric motors to provide all-wheel-drive. The 350h variant is available with either front- or four-wheel-drive, but produces less power at 241bhp. 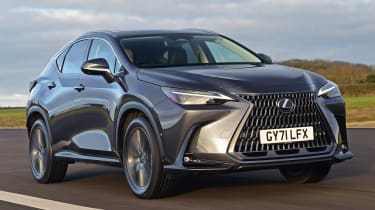 The NX goes head-to-head with the likes of the Audi Q5, BMW X3 and the Mercedes GLC, although the 450h+ plug-in hybrid version may be appealing to buyers not yet ready to make the move to an all-electric SUV such as the BMW iX3, Jaguar I-Pace or Mercedes EQC. The 450h+ is between £10k and £20k cheaper than these premium EVs and, in offering up to 40 miles of electric drive from a full charge of its battery, could offer similar efficiencies – depending on your lifestyle and driving habits.

Lexus is normally pretty generous with its levels of standard equipment across all of its models, and the NX SUV certainly doesn’t buck this trend. But, while the entry-level NX specification includes items such as 18-inch alloy wheels, front and rear parking sensors, a 9.8-inch media touchscreen with integrated sat-nav and heated front seats, the extra luxuries offered with the optional Premium and Premium Plus packs could prove tempting. Further equipment levels include the F Sport which adds a more dynamic edge (think BMW M Sport trim) and top-of-the-range Takumi versions that provide a focus on overall comfort and refinement.

If you’re looking to buy a Lexus NX, why not visit our sister site buyacar.co.uk for the latest deals…