Kia has announced its business roadmap leading up to the year 2030. The brand intends to sell 4 million vehicles annually by the end of the decade – with 1.2 million being battery-electric vehicles (BEVs).

14 new Kia EVs will be launched by 2027 in order to help the firm achieve this figure, and it will also be switching to more sustainable manufacturing methods, recycled materials, and renewable energy where possible.

From 2023, Kia plans to launch at least two BEVs per year, which will then build up to a full lineup of 14 by 2027. This new model range is said to include two pick-up trucks and an entry-level vehicle – this will likely be priced to entice customers with tight budgets away from rivals such as MG.

One of the first to arrive will be the EV9 SUV, which will see the brand debut a wide range of its next-generation technology, including its ‘AutoMode’ autonomous driving system. Over-the-air updates and ‘Feature on Demand’ services will also be available for the first time. 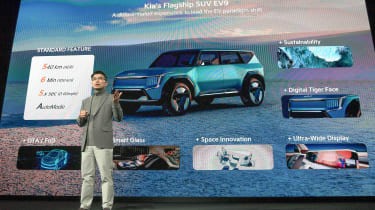 Another one of Kia’s goals for 2030 is to become a leading global Purpose Built Vehicle (PBV) brand. The brand will build these PBVs for corporate customers in an effort to meet a forecasted five-fold increase in demand for bespoke products by 2030.

For now, these PBVs will be built upon existing platforms such as the e-Niro Plus, and will be aimed at taxi fleets and ride-hailing services. From 2025, however, dedicated skateboard platforms will be introduced.

These skateboard platforms are flexible in size and feature modular bodies, which can be easily swapped out to meet the needs of each business. Options could include low-level logistics vehicles, car-sharing vehicles and delivery vehicles.

What do you make of Kia’s plans for the future? Let us know in the comments section below…