If you’re in the market for a family hatchback, the Kia Ceed should be on your shortlist. It’s well priced, good to drive and has all the latest technology. It’s important not to be wooed by models higher up the Kia Ceed range which come with every conceivable item of equipment, although unlike some rivals, the entry-level model offers the same amount of practicality, but it also has a decent amount of kit.

What’s more, it’s arguably more comfortable to drive than sportier models which ride on bigger wheels. Add in the attraction of Kia’s seven-year warranty and the Ceed is a strong contender in the family hatchback class.

The Internet has altered many aspects of modern life, including the name of the Kia Ceed. The third-generation version of the five-door hatchback went on sale in 2018, but what it didn’t have was an apostrophe in its name. Kia decided to review the name and make it easier for prospective customers to type when they search for the car online.

But the change from Cee’d to Ceed was needed, as the car faces off against some seriously capable rivals – the Volkswagen Golf, Ford Focus and Vauxhall Astra, to name but three – so it’s no surprise that the firm has gone to great lengths to help the Ceed stand out. Kia introduced a facelifted Ceed model in 2021, with sharper exterior styling and updated on-board tech, which has helped the Korean hatch remain competitive in its class.

As well as the new name, the Ceed is part of a four-strong family of models: a five-door hatchback, Sportswagon estate, the ProCeed shooting brake and new Xceed crossover.

Two petrol engines are available: a 1.0-litre unit with 118bhp, or a more powerful 1.5-litre delivering 158bhp. A 134bhp 1.6 CRDi diesel with 48v mild-hybrid technology also features, as does a 139bhp plug-in hybrid in the Xceed range. 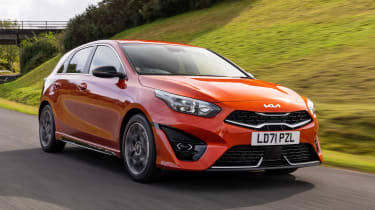 Kia has pared back the available trim levels for the Ceed, so the range is now simpler to understand. The 2 specification is the entry point to Ceed ownership, followed by the mid-range 3 and top GT-Line. The Xceed plug-in hybrid model is offered with just the 3 trim level and a more luxurious 4 spec, too.  It’s worth taking some time to work out exactly what kit you need for your family hatch, as the 2 model comes pretty well stocked and will save you quite a bit of cash over a top-spec car.

All cars are built on Kia’s new K2 platform, and all are front-wheel drive. A six-speed manual is standard, with a seven-speed DCT dual-clutch gearbox available with the 1.5 petrol and diesel versions.

The Ceed is one of Kia’s biggest-selling models in Europe, and as a result, Kia says it’s designed, engineered and built in Europe for European tastes. Alongside the VW Golf, Ford Focus and Vauxhall Astra, the Ceed’s rivals include the Hyundai i30, which uses the same engines (in different states of tune), gearboxes and platform, the Honda Civic, SEAT Leon and Peugeot 308.

If you’re looking to buy a Kia Ceed, why not visit our sister site buyacar.co.uk for the latest deals…