With its hi-tech looks, the Ioniq 5 could feel a bit of a flop if its cloud connectivity wasn’t up to par. As it turns out, it’s one of the Hyundai’s great differentiators and another reason to love this car. It’s also a feature that lifts it above key rivals, particularly those from the Volkswagen Group.

As a child of the seventies, and a terminal geek, I’m still impressed that I can type something up on a computer and then get a hard copy of it on a printer sitting six feet away. So the concept of doing something on my smartphone that affects a car that could be parked up, minding its own business at the other side of the world, blows my mind completely.

And yet phone links to cars have been a bit of a failed promise so far. We’ve heard many marketing speeches about ‘connected vehicles’ but in truth, car companies have, to this point, proved that while they are generally rather good at making their core products, they are pretty rubbish at writing apps that allow remote access to them.

This changes now, though, because the latest iteration of Hyundai’s Bluelink app has transformed the way I use our Ioniq 5. It really is reaching the point where the phone in my pocket (a Xiaomi Redmi, if you’re interested) has become a very logical, very real extension of the car on my driveway.

For starters, the app interface is a doddle to use. The main home screen gives me basic information about the car’s status – what its current range is, whether or not it’s plugged in or charging, and so forth – but has a section, usefully high up in the page, that includes the remote function that I’m most likely to use: heating and ventilation.

There’s a handy big button for this, but a second page allows me to specify further detail, if I want it: the temperature I’d like in the car, whether the windscreen defrost, heated rear screen and side mirrors, and heated steering wheel are activated. This is a level of control that I’ve never seen before in a car app, and it works seamlessly.

So my morning routine, which invariably involves flicking through a few e-mails while eating my breakfast, now also includes a quick check on the Bluelink app to see what the temperature is outside, and then a couple of key presses to set the Ioniq 5 up for the school run. There’s nothing quite like watching my neighbours scraping their windscreens while the Hyundai is sitting there, front glass steaming away, plugged in and with a full battery, ready for use.

Nor does it have to be plugged in. We ventured out for a cold Sunday-morning stroll over some National Trust parkland, and as we started walking back to the car I flicked on the app to get the Ioniq 5 heated up ahead of our return. It used up a few extra miles of range, no doubt, but it was a welcome hit of instant heat when we got in.

The other great thing with Bluelink is its speed. Years ago, I remember running a BMW i3 and a VW e-Golf whose apps had some of the same functionality. But sending a remote command resulted in the app whirring away for minutes at a time before it did anything. Hyundai’s back-end servers are clearly better resourced, because the whole process – pressing the button, going through a fingerprint identity check and then getting confirmation that the climate control has been activated – takes about 10 seconds.

Our car has just broken through the 4,000-mile mark and it continues to impress, particularly its cruising comfort, which we’re enjoying all the more now that we’re able to get out and about more again.

The car’s range is still affected by the cold, but the battery management software is showing signs of becoming more optimistic, because while we’ve seen just over 200 miles predicted on a full charge, that figure has now jumped up, even on wintry mornings, to around 220 miles.

We’re putting our reigning Car of the Year to its most in-depth, real-life test yet 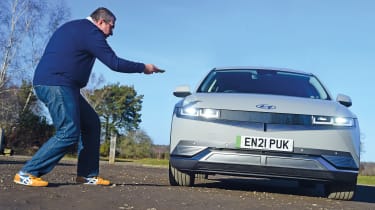 It’s always an exciting time when a new long-termer arrives on the Auto Express test fleet – and there’s definitely a further frisson of anticipation when the car in question is one of our award winners. So expectations are high for the latest model on my driveway: the Hyundai Ioniq 5, our reigning overall Car of the Year.

This is, it must be said, not the first pure-electric Hyundai that has ended up outside my house for a prolonged period. A few years ago I ran a Kona Electric, and I came away mightily impressed by the amount of real-world range it offered for the cash.

The Ioniq 5 is proof, however, of how far Hyundai has come in a short time. First, the design is far more dramatic than the fairly anonymous Kona’s (and our example was in Kermit green, a far more lurid shade than our Ioniq’s gloss silver). The Ioniq 5 is bigger than it looks in pictures (you have my ample girth in the pic above to give you a sense of scale), but its 8-bit, eighties-influenced styling has really split opinion – a major feat for a firm that used to struggle to get noticed.

Beyond the looks, though, the technology on board the Ioniq 5 is so advanced that it feels like the whole project has jumped about three generations. To recap, the Hyundai sits on E-GMP, Hyundai’s first bespoke electric-vehicle platform. That means the polarising looks wrap around a cabin that offers levels of space usually found in the class above.

You can buy the Ioniq 5 with several different combinations of battery and powertrain, but we’ve steered clear of the most powerful option – the four-wheel-drive, twin-motor version, and the top trim level. This isn’t a bad combo – in fact, it was good enough to earn those New Car Awards gongs last summer – but the range has expanded since then and we feel the sweet spot is mid-spec Premium, with just a single rear motor and the large battery.

So that’s what we’ve gone for: 215bhp, 73kWh, a range that should be north of 300 miles, and a price tag just shy of £42,000. Should you exhaust that battery, the E-GMP platform also incorporates 800V electrics – the kind of technology usually reserved for EVs costing twice as much – so if you find a fast enough charger, the Ioniq 5 is capable of swallowing juice at a rate of more than 200kW. Getting from empty to 80 per cent capacity can take as little as 18 minutes; I’ve discovered I can barely drink a service-station cup of coffee in that time.

Another standout feature that we’re looking forward to trying – beyond proving a point in front of our snapper’s lens in the photos here – is the car’s ability to give out power, as well as taking it.

A three-pin socket mounted on the front of the rear seats allows you to charge or run all manner of devices, including an Auto Express-issue MacBook Pro laptop – but perhaps more significantly, the charging port itself is able to dispense electricity as well as receive it. That means the Ioniq 5 can, in theory, give another EV a potentially vital slug of juice to get it to a proper charging point in an emergency.

Early impressions? The Hyundai is as comfortable around town as we remember it from our awards judging, with a slightly wallowy ride once you get up to speed.

It’s not remotely involving on a twisty road, but I’m happy with that compromise in the name of outright comfort. Sure enough, this rear-wheel-drive version doesn’t feel “EV rapid” but it’s certainly quick enough when pulling away from rest, and perfectly content at a motorway cruise.

Negatives? The foot-operated electric boot mechanism is bit too keen for its own good, so it has a tendency to lift the tailgate when you’re merely approaching the rear of the vehicle. It’s configurable via the car’s on-screen menu, thankfully.

Oh, and the real-world range is some way short of WLTP figures so far – but then, the car turned up perfectly in sync with the UK’s traditional two-week winter cold snap. We’re already enjoying the model’s pre-conditioning function on icy mornings, and remain optimistic it can claw back range as conditions improve.