Another week, another new entry into the electric-car market. And this time it’s a biggie: Toyota, the leading light of hybrid electrification over the past 20 years, has finally ditched the combustion engine altogether for the first of its bZ EV line-up.

We’ll leave you to read Sean Carson’s full verdict on a late prototype of the bZ4X – but one interesting aspect to take from the review is that Toyota is trying to use this car to shake up its retail model. Fact is, a four-wheel-drive version of this car is going to have a list price of more than £48,000 – which is quite a lot for a five-seat family SUV.

However, Toyota is aiming to make this figure irrelevant for many private customers by rolling out the bZ4X on a lease deal that makes the more conventional PCP finance scheme look a bit pricey. We wouldn’t say the ‘Kinto’ arrangement is particularly cheap, with a deposit of more than £3,500 and monthly payments of over £600. But then, it does include servicing, installation of a home charger and a period of access to Toyota’s ‘single-card’ public charging network – while costing less every month than the regular PCP. 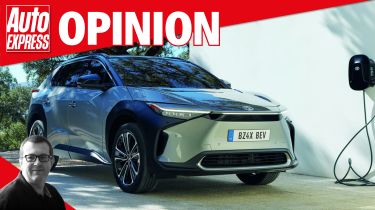 We’ve seen others experimenting with ‘all-in’ lease arrangements before – some firms are using their all-electric models to play with moving the whole process online – but it seems quite significant that Toyota, one of the most mainstream of brands, has chosen now to really push the idea (and through its showrooms, some of which will feature ‘bZ hub’ areas devoted to the EVs).

As the transition to electric motoring continues to accelerate, manufacturers are going to have to use lots of tricks (or let’s call them novel approaches) to bring the buying process and ownership experience closer to as many customers as possible. We’ll see dozens of EVs unveiled in the months ahead; we may also see a varied line-up of ways of getting them onto our driveways.

Check out the latest Toyota news and reviews here…