If you can’t get mains power to where you clean your car or just don’t have the budget for a pressure washer, a hose gun can be your best friend when cleaning a seriously grubby car.

Guns may be primarily designed for gardening tasks, but they can also be used for car cleaning, with the jet going some way to emulating a pressure washer. But not all guns are made equal, and there are a variety of modes available to increase versatility, while they can be made from cost-effective plastic or tough metal.

So which hose gun is the best substitute for a pressure washer when it comes to car cleaning? We got to grips with eight to find out.

A variety of spray modes is a boon for car use, making life easier when tackling different rinsing tasks, so we looked for a good selection of modes and an easy way of selecting them.

One of the most vital settings is having a powerful jet for cleaning the lower half of the car and under the wheelarches, so we measured how far each unit could reach.

We also expected the guns to be comfortable to hold in wet hands. A trigger lock is always useful for long jobs, because it eases aching fingers. We also accounted for each gun’s price from online sources.

The Draper twins take the top two spots with a combination of performance and practicality, while the seriously easy on-the-pocket Verve slotted into third place.

We liked this previous test winner’s solid hybrid construction of aluminium, plastic and rubber with a brass bayonet connector, and at 228g, it wasn’t too heavy to be impractical.

The handle had four sculpted finger grips and the adjustable water control was handily fitted to the rear of the gun. The flip-over lock was a bit basic, but worked well enough to keep the valve open for longer periods.

With jet, shower, mist, soaker, cone, centre and flat presets, the gun was very versatile. Its jet was impressive, too, being powerful and having a 6.5-metre range.

This Draper added an extra mode over our winning 25342 and although it was similarly constructed from a mix of metals and plastic, its design was slightly different.

All the water control was taken care of by a single lever at the rear of the gun. Thumb operated, it moved from off to full power easily, but our winner was more instinctive to use with its finger-mounted trigger.

Like the Draper 25342, the 19722’s tap connector was made from robust brass and was less likely to break than a plastic one.

One of three all-plastic guns to feature preset modes, the Verve was neatly designed, although it included no metal parts, so it lacked the solid feel of some competitors.

Denoted by symbols only, the range of eight modes covered all car requirements and more. On full jet, the Verve reached the six-metre mark and was easily powerful enough to clean under our test car’s wheel arches.

Rubber sections front and rear made it easy to hold and we liked the rear-mounted large trigger and locking lever. And what can’t be ignored is the current incredible price at B&Q, making it great value for money. 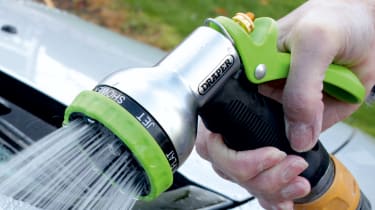 This well made, all-plastic XHose spray gun was comfortable to use, not least because it weighed just 143g, making it the lightest of the eight products we tested.

We liked the rubberised handle, which is designed to direct water away from the hand, and the eight presets were clearly marked. Selecting them wasn’t so easy, though, because the ring was sometimes reluctant to click into place.

With a maximum distance of six metres, under-vehicle cleaning was good and the rear-mounted trigger was comfortable to use, but the metal hook lock was fiddly

One of three guns on test not to offer any presets, the Tech Traders was the only one to be made mostly from metal. It felt solid and was easily the heaviest here, at 376g.

The large front trigger features finger mouldings and could be pulled right back and clipped into place, taking the strain off fingers, while the rubberised handle for better grip worked well.

Despite the main jet being a touch off the best on test, at 5.5 metres, it did the job. The brass nozzle could be turned through a wide spread of options from jet to wide shower. But its weight and lack of presets didn’t help it in this company.

Unlike the two Draper guns, the Sealey was an all-plastic design. It claimed top spot for the number of spray modes, including shower, flat, full, centre, mist, angle, soaker, jet and cone.

At 176g, it was usefully light, but still felt well-made. We liked the large on/off trigger, which automatically locked into place every time. Water flow was controlled by a useful thumb lever, although we still prefer a variable trigger.

The jet and full modes reached six metres and were ideal for under-car work, with the rest offering plenty of rinsing options.

The second of our single-mode guns and another all-plastic device, the Gardena felt solid in use, with its large trigger clicking reassuringly in place when the built-in lever was shifted across.

We liked the grippy rear section and the gun felt good in the hand as we cleaned the car. Turning the nozzle changed the spray pattern from jet to wide, although there wasn’t the same degree of adjustment provided by the Tech Traders gun.

Apart from its limited mode, it was easily the most expensive here and looked more so when compared with guns that offered far more.

Like its sibling, this Gardena was well designed and made, so we’re not surprised the guns were listed as being frost-resistant. This one came with an impressive five-year guarantee, too.

We liked the large, front trigger with a built-in, flip-over lock. The water-pressure control was a simple left-to-right lever on top of the gun and wasn’t difficult to operate.

Its biggest downside is that its single mode was a simple shower spray, which was really only useful for rinsing the car, while the spray distance of just 1.5 metres made its use very limited.