Audi’s first all-electric production car certainly hits the spot. Although its true abilities are restricted by the UK’s limited 50kW charging network, as this infrastructure improves the SUV’s appeal will grow. It’s quiet, comfortable and beautifully built, while also coming laden with all the latest tech and semi-autonomous drive features.

It’s practical, too, with loads of space for the family and all their luggage, albeit without a seven-seat option, but if you like the idea of a premium electric SUV and you can live with the available charging options, the Audi e-tron should be very near the top of your shortlist.

The e-tron is Audi’s very first all-electric production car, and follows a whole two years after the first Tesla Model X arrived in the UK. But, the extra time has been well spent by the Germans, and the Audi beats its rival in almost every way; comfort, refinement and build quality are all fantastic, and with a claimed 271-mile maximum range and quick charge options, it could well be a genuine contender for even the biggest EV sceptics.

A new Sportback model (coupe-style SUV) has also been added to the range, with the e-tron GT (saloon) set to join the line-up later in 2020. There is a choice of two power outputs, badged 50 quattro and 55 quattro – the standard SUV comes with either the 71kWh or 95kWh battery, delivering 309bhp and 402bhp respectively, while the Sportback is only offered with the more powerful unit.

Five trim levels are available for the SUV: e-tron, Technik, Sport, S line and Launch Edition, while buyers have the option of the Sportback in S line or Launch Edition specification. All versions get LED lights, 20-inch wheels, electrically-adjustable heated leather seats and two charge ports; one on either side of the car. 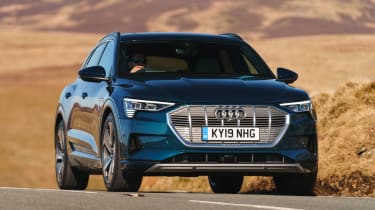 All models use a two-motor set-up with one motor on each axle. Audi’s quattro all-wheel drive system is standard, as is the firm’s adaptive air suspension. Being an EV, the car gets a single-speed automatic transmission and features some of Audi’s latest semi-autonomous driving technologies. Audi says the e-tron is designed to receive Tesla-style ‘over the air’ updates, although this functionality won’t be available until sometime in the future.

As well as the Tesla Model X, the Audi e-tron rivals models like the excellent Jaguar I-Pace, which was awarded Auto Express 2018 New Car of the Year. The e-tron sits proud as Audi’s only electric car for the time being, slotting in between the Q5 and Q7 in terms of size and interior space. Its styling is fairly conservative, yet is easily recognisable as an Audi SUV. The Audi’s excellent comfort, tech-filled interior and class-leading refinement mean it could be e-tron vs I-Pace for the overall crown.

For an alternative review of the latest Audi e-tron SUV visit our sister site carbuyer.co.uk