This is the new Audi Q4 e-tron Sportback concept, seen in official images that have leaked out ahead of the car’s forthcoming launch.

The fresh images show how Audi is hoping to diversify the line-up of its small pure-electric SUV, by offering a more rakish coupe version alongside the regular car.

Like the regular Q4 e-tron, previewed by a concept that was shown back at 2019’s Geneva motor show, the Q4 e-tron Sportback will sit on the VW Group’s latest MEB platform, which has been engineered purely for electric vehicles. 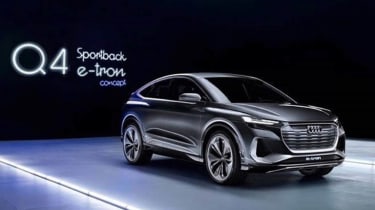 The leaked images show how the front end of the Sportback will stay close to the looks of the regular Q4 e-tron, but that the roofline will be much lower for rear-seat occupants. There also appears to be an integrated spoiler that runs across the bottom of the long, curved tailgate glass panel, and a particularly complex rear wing that incorporates multiple sharp creases designed to give the car a more aggressive ‘shoulder’.

There’s no word yet on when we’ll see a production version of the Q4 e-tron Sportback but expect the mechanical specification to be close to the regular Q4 e-tron’s – as well as the VW ID.3 and Cupra el-Born. That should mean a battery pack of around 82kWh, four-wheel drive and a power output of around 300bhp. It’s unlikely that Audi will offer the car with a single-motor, two-wheel-drive configuration.

The Q4 e-tron should be on sale by summer 2021 – and with the likely preview of the Sportback so far in advance of that, it’s conceivable that it could arrive around the same time, or at the latest by autumn 2021.