For fashion-conscious buyers, the Fiat 500 remains the city car of choice. Retro styling, a variety of limited edition variants and a wide range of customisation options mean that it’s still as popular as ever. The TwinAir engines are fun and the car’s small size makes it easy to park, although there’s no denying that the 500 falls short in other areas.

A facelift in 2016 introduced a new infotainment system, but other flaws such as flimsy build quality, poor equipment levels and high list prices were left unaddressed. This is a shame, but even so the 500 retains a unique character that few other cars on the road can match. Millions of sales worldwide suggests the faults are often overlooked, too.

The Fiat 500 has been for sale in dealers for well over a decade now. It has gone on to spawn a sporty Abarth version and the 500C convertible, while the 500X SUV and 500L MPV take the city car’s styling and add practicality to the mix. There’s also the new 500 Mild Hybrid version offering more efficiency and lower emissions.

Go for the regular Fiat 500 and as ever you are spoiled for choice in terms of spec and equipment. This also means there is plenty of variety on the used market if you’re looking for a second hand example.

Whether you’re buying new or used, we’d recommend choosing the TwinAir two-cylinder turbo petrol engine. It’s a nippy performer that suits the 500’s character. Real-world fuel economy is good and it’s still the best engine available in the 500. Also offered is Fiat’s ageing 1.2 petrol, while the Multijet diesel is no longer offered new as it’s never been a big seller.

All Fiat 500s are three-door hatchbacks that have a front-engine, front-wheel-drive layout – in contrast to the rear-engined original. Again, an automatic gearbox was offered for a while, but the current range only comes with a five-speed manual box.

The standard 500 range starts with Pop, while the Lounge version is a staple of the line-up that’s pretty well equipped. The Fiat 500 Sport adds a racier look as the name suggests, although as it’s powered by the same engines as the rest of the range, running costs are still low. As of 2019, the range was completed by Star and Rockstar editions, which add more kit to the mix, while there’s also a Launch Edition trim for the hybrid version. 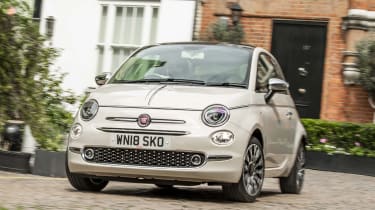 Over time there has been a revolving door of special editions that have come and gone. There have been variants based on the Gucci and Diesel fashion brands, one created in association with Riva yachts, as well as Fiat’s own specials, such as the sportier 500 S, 500 Pink, 500 60th (celebrating 60 years of the original 500), the 500 Mirror with improved connectivity and the 500 120th, which marks Fiat’s 120th anniversary.

In a way, the Fiat 500 has established itself as its own niche in the new car market. It’s smaller than the other retro-inspired model for sale today, the MINI, while its compact dimensions aren’t quite small enough to make it a genuine city car. Prices ranging from around £13,000-17,000 mean it falls between city cars and premium superminis in terms of price, too.

Other rivals you could consider include the Vauxhall Adam and DS 3, although both reached the end of their production lives in 2019. This leaves smaller city cars such as the Skoda Citigo, Citroen C1, Kia Picanto and their related siblings, although none offer the same level of personalisation, nor the 500’s retro looks.

For an alternative review of the latest Fiat 500 Hatchback visit our sister site carbuyer.co.uk