The facelifted second generation BMW X1 remains a strong competitor in the fierce small premium SUV segment. Where the original X1 wasn't much more than a pumped-up 1 Series, the current car is more like a shrunken X3. The chunky looks create plenty of space inside, so it's ideal family transport for buyers who feel that a compact hatchback isn't big enough for their needs.

But this practicality doesn't come at the expense of driving fun, and enthusiasts will be pleased to hear that the X1 delivers the kind of satisfying handling that BMW is famous for. Both front and four-wheel drive versions are engaging to drive, while the range of three and four-cylinder turbo petrol engines deliver punchy performance combined with decent running costs. The X1 is as good as ever.

As the entry point to the BMW SUV range, the X1 is a great choice for buyers after a compact premium model. It certainly erases any memories of the first model, which was little more than a high-riding variation of the 1 Series hatchback.

The BMW X1 Mk2 went on sale in 2016 with the BMW model code F48. It was a ground-up redesign that's based on the same UKL2 platform as the MINI Countryman and Clubman, BMW 2 Series Active and Gran Tourers and the coupe-styled X2 crossover. The platform is offered with front or four-wheel drive, so unlike the previous X1, there's no rear-wheel-drive option on the current model. While that will be anathema to diehard BMW fans, the front-drive versions (badged sDrive) handle well, as do the xDrive 4WD variants. A facelifted version of the X1 was launched in 2019 and featured exterior and interior changes along with the addition of plug-in hybrid powertrains for the first time.

The facelifted X1 features styling and dimensions that are more familiar to the larger X3 SUV than the 1 Series hatch. That means a raised ride height and a bigger body that creates more space inside than the first generation model, making the X1 a viable choice for buyers needing more space than a compact family hatchback can offer.

There are front and four-wheel drive variants available, with the majority of models coming with front-wheel drive as standard. The sDrive18i has a 1.5-litre three-cylinder petrol engine making 139bhp, while the sDrive20i is a four-cylinder petrol making 190bhp. The sDrive18i has a six-speed manual gearbox as standard, while an eight-speed auto is offered as an option. This auto is standard with the 20i. A seven-speed gearbox is offered on lower models. Both petrol models have the option of four-wheel drive xDrive.

The diesels comprise the sDrive18d with a 148bhp three-cylinder, six-speed manual gearbox and front-wheel drive, and the xDrive20d, which has a 187bhp four-cylinder diesel and four-wheel drive as standard. This model also has an eight-speed auto as standard, while this gearbox and the 4WD system can be added to the 18d for extra cost.

A PHEV model joined the range in the mid-life facelift. Called the xDrive25e, it uses a 10kWh lithium-ion battery pack, an electric motor mounted to the rear axle and a turbocharged 1.5-litre three-cylinder petrol engine, sending power to the front wheels via a six-speed automatic transmission. 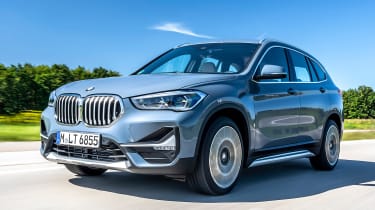 There are four variants of BMW X1 on sale: SE, Sport, xLine and M Sport. All cars come as standard with sat-nav and infotainment with connected services, a power tailgate, rear parking sensors, climate control, multifunction steering wheel and a sliding rear bench to boost versatility.

Unlike some rivals, all engines are available in every trim, so you can have the basic 18i petrol in fully-specced M Sport trim, or the most powerful xDrive20i in subtle SE trim. Prices for the X1 start from around £29,000 and rise to around £40,000, which is about £1,500 less than the entry level X3. M Sport is the most expensive trim, but you do get the option of the M Sport Plus Pack with exclusive kit.

Two rivals for the X1 come from the same stable, in the shape of the BMW X2 and MINI Countryman. The former is a sportier looking alternative to the X1, which has racier looks, but not as much space inside, and carries a premium of around £1,500. The Countryman is around £5,000 less than the X1, but offers a bit less space.

Elsewhere, the Audi Q2, Mercedes GLA, Volvo XC40, Range Rover Evoque, Mazda CX-3 and VW T-Roc can all be considered rivals to the X1, while a smaller budget can grab yourself a more versatile competitor in the shape of cars like the Peugeot 3008, Skoda Karoq and SEAT Ateca.

For an alternative review of the latest BMW X1 SUV visit our sister site carbuyer.co.uk