Aston Martin has revealed the first production-ready version of the new DB5 Goldfinger. It’s a continuation replica of the original 1963 sports car that has been equipped with similar gadgets and weaponry to the DB5 used by James Bond in the film Goldfinger.

Production of the Aston Martin DB5 Goldfinger is limited to just 25 examples – and each will be built with a period-correct specification, sharing the same engine, chassis and drivetrain as the original DB5. Aston Martin says its engineers dedicate roughly 4,500 hours of labour for each example.

Like Bond’s DB5, the Goldfinger features a rear smoke screen delivery system, revolving number plates and a simulated oil slick release. There are also battering rams for the front and rear bumpers, a simulated tyre slasher, along with imitation twin machine guns, which spring from the front wings.

Finally, there’s a deployable bullet resistant shield for the rear window and a removable passenger seat and roof panel, which imitates the ejector seat on the Goldfinger DB5.

The accuracy continues inside, with buyers getting the same radar screen tracker map, a telephone in the driver’s door, an underseat weapons tray and a button for the ejector seat, which is fitted under a flap on the gearstick. The rest of the car’s gadgets are operated using a switchboard mounted in the car’s centre console that’s nearly identical to the one in the Bond film. 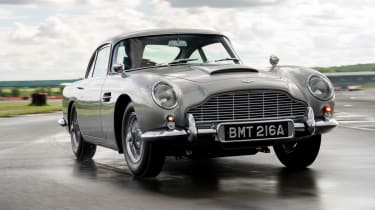 To make the DB5 Goldfinger’s gadgets come to life, Aston Martin called on the services of Chris Coubould OBE. The special effects guru has worked on countless action movies, including 11 previous Bond films.

Chris explained the challenges of building movie cars for the real world. “We have licence in the film world to “cheat” different aspects under controlled conditions,” he said. “For instance, we might have four different cars to accommodate four different gadgets. We obviously don't have that luxury on these DB5's as all the gadgets have to work in the same car all the time.”

Like the original DB5, this upgraded continuation model is powered by a naturally aspirated 4.0-litre straight-six petrol engine, which is fed by three side-draught SU carburettors. The engine has an output of 290bhp – and it sends its power to the rear wheels via a five-speed manual gearbox and a mechanical limited-slip differential.

The rest of the car’s chassis is faithful to the original DB5, with servo-assisted steel disc brakes, non-assisted rack and pinion steering and coil-over spring and damper units. There’s an anti-roll bar at the front and, like Bond’s car, it has a live rear axle with two radius arms and a Watts linkage, which support the unit when cornering.

Each Aston Martin DB5 Goldfinger model is priced at £2.75 million before local taxes – and first deliveries have already commenced, with Aston planning to continue the production run throughout the second half of 2020. Unfortunately, due to the nature of the modifications, Aston Martin says that none of the 25 cars will be road legal.

What do you make of the new Aston Martin DB5 Goldfinger? Let us know in the comments section below