It’s hard not to look at the 2020 season as a bit of a ‘holding pattern’ for Formula 1, with a radically overhauled 2021 rules package on the horizon and little movement on the driver market over the winter. But there are several points of interest nonetheless. Will Mercedes drop the ball or carry Hamilton to a Schumacher-equalling seventh world title? Can Vettel recover his form at Ferrari after being comprehensively outclassed by new recruit Charles Leclerc in 2019? Is this the year Red Bull and Max Verstappen finally mount a title challenge?

Further down the pack, Esteban Ocon versus Daniel Ricciardo will be a fascinating intra-team battle at Renault, McLaren has momentum to maintain, and Williams and Haas will be battling furiously to avoid the ‘wooden spoon’.

Take a look at our grid guide below to get up to speed with F1's 2020 season.

The 2019 season showed that Mercedes is beatable – but only on occasion. Yes, Max Verstappen and Charles Leclerc were able to steal poles and wins here and there, but still no-one could get close to the crushing consistency of the two Silver Arrows.

It’s hard to look past a record-equalling seventh title for Hamilton come the end of the season (or even sooner). While Valtteri Bottas had a much stronger 2019 than 2018, the conclusion must be that the Finn is probably never going to mount a genuine season-long challenge, unless Hamilton has a major dip in form for some unforeseen reason

Did you know? After a winless 2018, Bottas topped the podium four times during 2019

Did you know? Hamilton has won at least one race every year he has competed in Formula 1

Observers have seized on Merc’s reliability woes in testing as evidence that the Brackley outfit may not have things all its own way this year. But if any team has the resourcefulness needed to quickly bounce back from such a setback, it’s Mercedes.

Talk of Ferrari’s performance in testing was swiftly overtaken by the furore over the FIA’s investigation into the legality of its 2019 engine. But even before that bombshell dropped, the Italian squad wasn’t exactly brimming with confidence about its new car.

Rivals and onlookers then claimed this was all a bluff, but team principal Mattia Binotto insisted the car is not as fast as he wanted or expected it to be. The other big question mark going into the season was Sebastian Vettel – but that was resolved during F1’s enforced hiatus when Carlos Sainz was announced as a Ferrari driver for 2021.

Did you know? Vettel welcomed his third child, his first son, with wife Hanna in November

Did you know? Leclerc has a 19-year-old brother, Arthur, who currently races in Formula 4

Strong qualifying pace and some superb drives from Leclerc were undone too often during 2019 by ‘classic’ Ferrari strategic and tactical slip-ups. But the team may not have sufficient pace to even be in that awkward position this year.

Could they have finally cracked it? With a combination of apparent pace and reliability in testing, and a strong sense of confidence coming from lead driver Max Verstappen and team boss Christian Horner, the signs are looking very positive for Red Bull heading into the 2020 season. No, it’s not going to leave Mercedes for dust, but all the pieces look to be in place for more hard-charging wins from Verstappen and possibly some podiums from the very impressive Albon.

Did you know? Albon was promoted to Red Bull from Toro Rosso for the second half of the 2019 season

Did you know? Verstappen is one of a number of F1 drivers who regularly participate in sim racing

This could be the year that Red Bull’s gamble switching to Honda power pays off. In Max Verstappen it has a driver at the peak of his powers, and a promising but not disruptively fast Alex Albon in the second seat is a recipe for a string of solid results.

McLaren completed a remarkable turnaround since ditching Honda engines at the end of 2017, and the new management line-up of team principal Andreas Seidl and tech director James Key have their feet under the table.

But there’s still a way to go before thoughts at Woking can turn to race wins and titles once more, and the wider McLaren Group has been hit hard by the coronavirus economic fallout. Although the team was ‘best of the rest’ in 2019, there was still a yawning 272-point gap to third-place Red Bull. Drivers Norris and Sainz will need to keep their heads down and focus on diligent development work.

Did you know? Norris recently moved to live just a few minutes away from McLaren’s factory in Woking

Did you know? Sainz’s father, the two-time WRC champion, won the 2020 Dakar Rally in Saudi Arabia

It may be a case of running to stand still for McLaren this year. There’s little point making huge efforts to bridge the still-considerable gap to the top three with the 2021 rule change on the way; the focus will be on staying top of the midfield.

High-level boardroom drama and ‘nothing off the table’ spending reviews sent shivers of uncertainty through Renault’s F1 team in 2019 – but that was nothing compared to the business turmoil brought on by coronavirus.

The brand’s immediate future in the sport seems to be safe despite all this, but there’s no escaping the fact it has underperformed on track; according to its own five-year plan, it should have been winning races in 2019 and readying a title challenge in 2020. Instead, 2020 feels like a make-or-break campaign, but Ricciardo has indicated he’s lost faith, deciding to go to McLaren for 2021.

Did you know? Ocon comes back to racing after a year as Mercedes’ test and development driver

Did you know? 2019 was Ricciardo’s lowest finish in the standings since racing with Toro Rosso in 2013

Renault has failed to deliver on targets that it set itself when returning to F1 as a team in 2016. Unless there’s a big upturn in form, Ricciardo won’t be renewing his deal at the end of the year and Ocon’s prodigious driving talent will be wasted here. 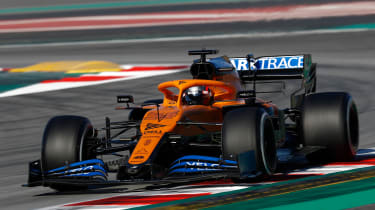 ALPHA what? Don’t panic, this seemingly all-new outfit is simply a renamed Toro Rosso, now wearing the moniker of Red Bull’s fashion label and guaranteed to cause confusion among commentators when either of its drivers are battling Alfa Romeos on track.

This team is supposed to be a ‘feeder’ squad, readying talented youngsters for a career with the main Red Bull outfit, but in 2020 it finds itself in the odd position of running two drivers who’ve been sent back down from that position. Gasly did bounce back well from his 2019 demotion, while Kvyat remains fast but inconsistent.

Did you know? Gasly was demoted from Red Bull halfway through 2019, but finished second in Brazil

The archetypal midfield team, but that only makes its occasional podium visits all the more gratifying. It’s just a shame that the strange workings of the Red Bull junior programme have resulted in known quantities driving, rather than exciting new talent.

Turmoil and cashflow problems associated with a change in ownership in 2018 had a knock-on effect in 2019 for the team formerly branded as Force India, and usually known for punching well above its weight in F1.

Things are looking a lot better now, with a future as the works Aston Martin team on the horizon for 2021, and a 2020 car that looked pretty quick in testing – even if it was hard to ignore the fact that it leans very heavily on the design of last year’s title-winning Mercedes.

Did you know? Stroll’s mother is Belgian and he has dual Canadian and Belgian citizenship

Did you know? Perez has two children, a boy and a girl, with wife Carola, whom he married in 2018

Onlookers may scoff at how close the 2020 Racing Point is to the 2019 Mercedes, but AlphaTauri and Haas take a similar approach and it’s within the rules. A slightly uninspiring driver line-up could be the weak point here, but Perez may still surprise.

The first year of the former Sauber team’s rebirth as an Alfa Romeo works outfit was a relatively low-key affair, although there was a big haul of points for finishing fourth and fifth in the chaotic Brazilian Grand Prix.

Right now, Alfa doesn’t seem to have the strength in depth to compete with upper-midfield teams such as McLaren, Racing Point and Renault. It also remains to be seen what the long-term future of the team is in the context of parent company Fiat Chrysler’s merger with the PSA Group.

Did you know? Giovinazzi had a roundabout route to F1; he’s raced sportscars and DTM, as well as single-seaters

Did you know? Raikkonen featured on a postage stamp in his native Finland after his 2007 title win

There’s a lot of goodwill for the former Sauber team, but it needs to shake things up to move forward. Giovinazzi is solid but not a future champion, while Raikkonen is in the twilight of a career that should have delivered more than one title.

After three years of solid progress in F1, Haas endured a torrid 2019, culminating in the farcical breakdown of its relationship with title sponsor Rich Energy over the weekend of the British Grand Prix.

Uneven performances from both drivers suggested one or both might be replaced for this season, so the announcement that both Grosjean and Magnussen were being retained for 2020 raised a few eyebrows.

What’s more, Haas set the slowest single lap of all the teams in pre-season testing, as well as completing the fewest number of laps overall. This could be another trying year.

Did you know? When sponsorship ran out early in his career, Magnussen briefly worked as a welder

While another year battling in the lower half of the midfield seems inevitable for Haas, it’ll be interesting to see how its ‘Ferrari B-team’ set-up works in Formula 1’s new era from the start of 2021. Until then, it’ll be about keeping up.

It's not much in the big scheme of things, but at testing in February, Williams was leaps and bounds ahead of where it was at the same point in 2019, when its car failed crash tests and wasn’t ready in time for the first days.

In 2020 testing it suffered from some of the same Mercedes engine reliability issues as the works squad, but there’s better news on the driver front, in the shape of the highly impressive George Russell. The bigger picture looks grim, though: a split with title sponsor Rokit and poor financial performance mean the historic team is now in search of new investors – or even a new owner altogether.

Did you know? Russell was born in King’s Lynn, Norfolk, and went to school in Wisbech, Cambridgeshire

Did you know? Latifi is Formula 1’s only rookie driver in 2020, replacing Robert Kubica at Williams

Things cannot get any worse than Williams’ 2019 annus horribilis and there were some encouraging signs in testing that the Grove squad has at least closed up the gap to the field. Unfortunately, it can’t really hope for much more.

What are your hopes for the 2020 F1 season? Leave us a comment below…