The Tiguan isn't a very exciting car to drive, but then neither are many of its closest crossover rivals. However, this second-generation model is good at many of the things that matter in its class. There’s lots of room inside for a growing family, the cabin is very well built and, although it’s a little dull inside, it’s now crammed full of the latest tech. Overall, this is an extremely well rounded package, and while it lacks personality, it ticks a lot of boxes.

It’s not cheap compared to the Mazda CX-5 and Ford Kuga, though, as VW has priced the Tiguan above the 'jacked-up Golf' segment it used to compete in and more towards the likes of the BMW X3. It's nearly as good as a premium SUV, but not quite – and that means the SEAT Ateca and Peugeot 3008 put it to shame for value while coming close in terms of quality.

The second-generation Volkswagen Tiguan arrived in 2016, and it builds on the appeal of the original with extra kit, more technology and a premium image inspired by the seventh-generation Golf hatchback. In fact, the Tiguan is a big seller for VW, coming in third in the charts behind the aforementioned Golf and Polo supermini. And just to demonstrate the Tiguan's importance, it now comes in two body styles – the standard five-seat model and the extended, seven-seat Tiguan Allspace.

The Tiguan range is similar to the Golf's, save for the performance, electric and hybrid versions that model offers. That means the model range kicks off with the S model, then moves to Match, SEL and R-Line Tech. There are clear differences between the four core trims, and if you parked an S next to an R-Line Tech, you could easily tell which one is on sale for a lot more than the other.

Indeed, prices range from around £25,000 to almost £44,000, meaning most models cost £150 a year in road tax and don't incur the extra charge (£325 between years 2-6) for vehicles priced over the £40,000 threshold. You need to be careful adding options to higher-spec models, as they could push prices beyond this mark.

Engines are 1.5 or 2.0-litres in size, with both petrol and diesel power offered in a variety of outputs. The 1.5 TSI EVO petrol comes in 128 and 148bhp guises; the lower powered engine only comes in S and Match trims, with front-wheel drive and a six-speed manual gearbox. The more powerful version is available with VW's slick six-speed DSG gearbox, 4MOTION four-wheel drive, or both together in SEL and R-Line Tech trim.

The 2.0 TSI can be had in 187bhp or 227bhp forms, and only comes with SEL and R-Line trims. It’s available only with an automatic DSG gearbox and four-wheel drive. 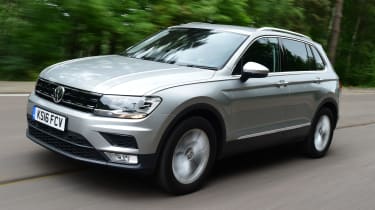 Go for a diesel and you have a choice between a 2.0-litre and a twin-turbocharged 2.0-litre, with, 148, 187 and 237bhp respectively. The lowest-powered diesel 148bhp 2.0-litre TDI can be had with 4MOTION four-wheel drive, VW's seven-speed DSG box, or both together. The 187bhp version gets both as standard, as does the most powerful diesel.

Volkswagen has tried to move the Tiguan upmarket with the Mk2, but that does mean it's not such good value when compared to some of its rivals. While the Tiguan is similar in size to cars like the SEAT Ateca, Skoda Karoq, Peugeot 3008 and Nissan Qashqai, its prices are similar to the larger Skoda Kodiaq. If you consider the VW as an alternative to models like the BMW X3 and Audi Q5, then it looks better value, but for some people VW still isn't a brand that can match the perceived premium image of these models.

Still, if you take the plunge, you shouldn't be disappointed with the quality and kit on offer, even if you can buy more spacious models for a similar price.